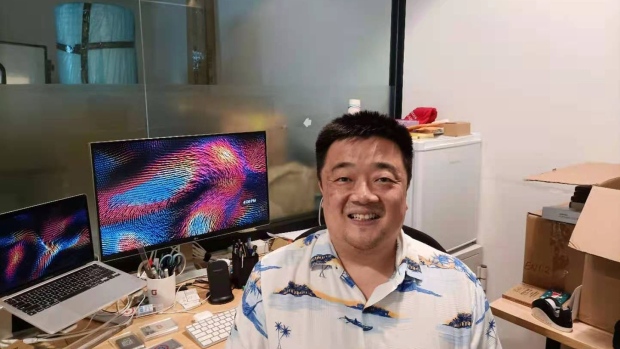 (Bloomberg) -- China’s crackdown on cryptocurrencies will probably intensify and may even lead to an outright ban on holding the tokens, according to Bobby Lee, one of the country’s first Bitcoin moguls.

Lee knows what it’s like to be on the wrong side of Beijing: He sold BTC China, the nation’s first Bitcoin exchange and at one point the second biggest worldwide, in the aftermath of a crackdown in 2017.

China has launched a new campaign against cryptocurrencies this year, taking action against miners and imposing curbs on crypto banking services and trading. The moves have fueled Bitcoin’s drop to about half its mid-April record near $65,000.

“The next thing they could do, the final straw, would be something like banning cryptocurrency altogether,” Lee said in an interview at his office in a WeWork space in downtown Shanghai, without elaborating on how a ban might be enforced. “I put it at the odds of 50-50.”

Lee recently returned to China after spending time in the U.S. and publishing a book, “The Promise of Bitcoin.” He’s now focused on his latest venture, Ballet Global Inc., which produces a hardware wallet that stores cryptocurrencies. Lee is still a Bitcoin bull, predicting it could end this year around $250,000 and reach $1 million by 2025. He declined to disclose his Bitcoin holdings.Lee’s comments below have been edited for clarity and brevity:

What do you think about the current Chinese crackdown on miners?

The government realized that in order to achieve financial stability, they don’t want to see an unregulated, volatile financial product that’s being traded, used and invested by the Chinese population.

China actually didn’t bother to differentiate green, renewable energy powered Bitcoin mining facilities versus the dirty coal powered ones. So to me, that’s a sign that it wasn’t about the cleanliness of the mining, but rather is more of a higher level sort of perspective about financial stability for the country.

Is the government done with their measures to crack down on Bitcoin?

I think there’s a few more things they could do. China knows that it still has many companies, exchanges operating in China. So the government could kick them out. I heard rumors that they might be doing that soon if not already.

The final straw would be something like banning cryptocurrency altogether. We’ve heard over the years that China has banned Bitcoin, technically that’s not true. Even today in July of 2021, Bitcoin is legal to own. You’re allowed to buy it, sell it to your friends or strangers. However, it’s just that you can’t do it through a platform or business, because all those businesses, all those platforms have been shut down.

When Bitcoin goes to $500,000, $1 million, China might ban Bitcoin altogether when people are no longer allowed to hold it. And that’s gonna be a lot of selling pressure on Bitcoin at that time. I put the odds at 50-50.

What advice would you give miners?

If they have capital equipment, they should sell that because it’s going to be worth less over time. I know many people are exporting these machines. North America has a big appetite for mining machines due to they have a lot of space, a lot of cheap electricity, and a lot of investors who want to put up their money for this hardware.

How important is the mainland Chinese market to Bitcoin?

The China market for Bitcoin has always been important, but going forward it’s going to be less and less important. China, just like many of the Asian countries, has always had a population that’s very much into investing in volatile assets. And that’s why Bitcoin has been very popular.

I think there will be a few more announcements coming up in the next few months that’ll really stop all the exchanges in their tracks in China. So unfortunately trading crypto will be a thing of the past, once you get past this year. And in a way it’s a good thing for crypto because in my heart, I always knew that Bitcoin’s success never depended on China. Just like it doesn’t depend on any one country, any one group of people.

Is the digital yuan the reason for the crypto crackdown?

The central bank digital currency version of RMB is not real competition against what we call traditional cryptocurrencies like Bitcoin and Ethereum. The digital yuan is really an evolution of the existing fiat money used in China. For the most part, I don’t think the regulatory agencies’ perspective about Bitcoin is caused by the upcoming digital RMB.

And your forecast for Bitcoin?

I don’t officially give financial advice, but personally I’m confident that the latter half of this year Bitcoin will go back above $65,000. I think it’ll peak out over $250,000 later this year.

Next year will be a bear market cycle. So we’ll see Bitcoin fall back down 50%-80% from the all-time high. I think Bitcoin will have its bull cycle every three or four years in the coming years. I expect Bitcoin to pass a million, two million dollars easily in the next 10-15 years. In fact the next cycle I predict to be in the year 2024 or 2025, and that’s when Bitcoin will cross half a million dollars and might even touch $1 million.

What’s the next big thing in China’s crypto industry?

Two topics are very hot. There’s decentralized finance, or DeFi, that started last year and now the topic of non-fungible tokens, or NFTs. I personally think they’re both more hype. I think this year with the bull market coming up, the hype will get stronger. I think they’ll rest in peace next year or the year after. We support DeFi and we support NFTs, so I’m happy to be on the bandwagon for both of those.