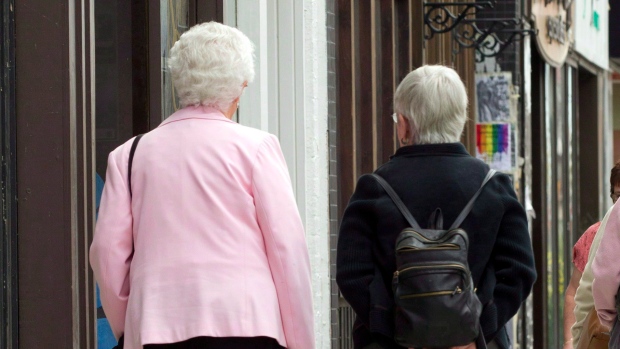 TORONTO — Early Gen-Xers may find it uncomfortable to admit, but they have joined their parents in being old enough to claim senior discounts.

The eldest members of the cohort born between 1965 and 1979 can save money by targeting their spending.

While most retailers only offer discounts to Canadians that reach the traditional age of retirement, some give customers a break long before age 65. Home renovation retailer Rona and Reno-Depot give a 15 per cent rebate on the first Tuesday of the month to customers 50 years and older.

"It is part of a marketing strategy to differentiate ourselves in a competitive market," said a spokeswoman for parent company Lowe's which doesn't have its own seniors discount.

Canadian Association of Retired Persons (CARP) members are eligible for discounts at an early age, including some stores, hotels and other businesses that don't even have a minimum age.

The group recommends that members ask whether or not discounts are available because they aren't always advertised.

All it takes is having a government-issued identification card that provides proof of age such as a passport, driver's licence or provincial health card.

Denny's gives a break on Thursdays and Rexall PharmaPlus on Tuesdays to that age group.

At age 60, you can get 10 per cent discounts at Pet Valu the last Thursday of the month, five to 10 per cent every Tuesday at M&M Meat Shops, a free small coffee at McDonald's and 10 per cent off on Via Rail.

York University in Toronto offers academic fee waivers to one undergraduate and one graduate course for seniors aged 60 and above.

Most transit agencies offer senior discounts for those 65 years and older but Calgary Transit also has a low income senior yearly pass. The seniors' discount on passenger fares for riding B.C. Ferries was restored last year so residents over 65 can ride for free Monday to Thursday, although the vehicle fare still applies.

Senior discounts were introduced decades ago when hyperinflation and the low availability of private pension plans made it challenging for seniors on fixed incomes.

They have remained an option even though many of today's seniors are well off, with lucrative pensions and hefty proceeds from skyrocketing real estate prices.

"They are a lot better off today but that doesn't mean that they're any less valued or any less important because it has become entrenched in our society that seniors deserve a break on just about everything," said David McVay of McVay and Associates, a Toronto-based financial-industry consulting firm.

The savings aren't material for most people, even poor seniors. Yet McVay said retailers are loathe to eliminate or reduce them out of fear of being targeted by powerful advocacy groups like CARP or paying a reputational price.

The Toronto-Dominion Bank experienced a backlash in 2012 after eliminating an account that offered free chequing and unlimited transactions to customers 60 and older and replacing it with a 25 per cent monthly rebate.

"The cost of the benefits are not so much that it's worth risking your reputation," he said in an interview.

As a senior himself, McVay said he and his wife seek out discounts.

For example, McVay said his wife was proud when she was able to save 10 per cent on repairs for their BMW just by asking if the shop offered a discount.

"Do BMW owners need a discount on the cost of repairs? Probably not, but it becomes part of the fun."

Ken Wong, a marketing expert at Queen's University's school of business in Kingston, Ont., says his consumer behaviour isn't affected by seniors discounts but he admits to taking advantage of them every chance he gets.

"If they're giving it why wouldn't I take it?" he says.

But Wong said offering the discounts represents lazy marketing that does nothing to induce customer loyalty while also eroding margins.

A better option for businesses, and one that has risen in popularity, is offering rewards to customers of all ages through loyalty programs.

"If seniors are entitled to something purely because of their age and the contribution they've made to society, I would submit that that's the responsibility of government, not business."