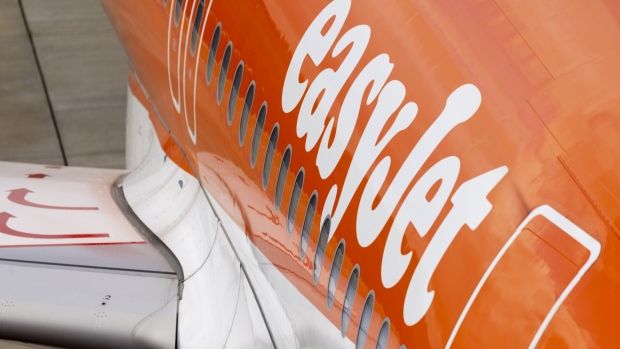 A sign on the fuselage of a passenger aircraft, operated by Easyjet Plc, at London Luton Airport in Luton, U.K., on Monday, May 10, 2021. The U.K. governments decision to loosen border rules frees Britons to feed their pent-up appetite for leisure travel. Photographer: Jason Alden/Bloomberg , Bloomberg

(Bloomberg) -- EasyJet Plc rejected an unsolicited takeover approach from Wizz Air Holdings Plc, according to people familiar with the plan, as the Hungarian discount rival sought to take advantage of a recovery in the short-haul aviation industry.

The preliminary offer was conditional, all-stock and had a low premium, EasyJet said Thursday in a statement without identifying the bidder. It was rejected unanimously by the board and has been withdrawn, the U.K. airline said.

Shares of EasyJet fell as much as 14%, as the company said it will instead raise $2 billion in stock and debt. The money will provide a buffer for EasyJet to get through the slow winter season and position it for a tentative return to leisure travel.

Representatives for Wizz Air and EasyJet declined to comment on the offer.

The decision to go it alone marks a gamble for EasyJet and its leadership, which has come under fire for its management of the coronavirus crisis from top shareholder and founder Stelios Haji-Ioannou. European airlines are ripe for consolidation, with fresh outbreaks continuing to impede a return to travel, and forcing carriers to raise more funding to stay afloat.

“EasyJet’s network and customer reach combined with Wizz’s low-cost management style would be a winning combination,” Bernstein analyst Daniel Roeska said in a note Thursday. “It would definitely be a major shake-up of the European space.”

While potentially beneficial for profits, a takeover “would probably be met with significant cultural reservations on the target’s side,” Roeska said.

Short-haul travel in Europe has partly rebounded during summer, but the comeback has been spotty. Luton-based EasyJet has been held back by changing U.K. travel rules. Budapest-based Wizz, meanwhile, is back above 100% of its pre-pandemic capacity, and Ryanair Holdings Plc, the Dublin-based low-cost giant, plans to expand over the winter.

Wizz, run by Chief Executive Officer Jozsef Varadi, is part of the constellation of low-cost airlines that count Bill Franke as their top investor. He chairs Wizz as well as Denver-based Frontier Group Holdings Inc., which went public earlier this year.

The company’s roots in Eastern Europe have given Wizz a lower cost base than even Ryanair. That edge has helped Wizz expand west, establishing bases in Austria, Italy and the U.K., where a bid to expand at EasyJet’s main Gatwick hub has been held back by a lack of access to operating slots.