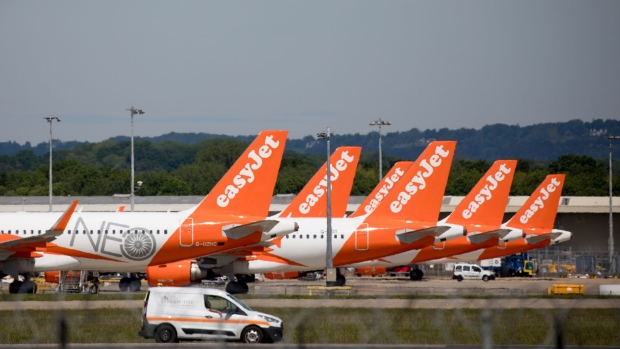 EasyJet Plc is considering cutting a third of its pilot positions and may eliminate three bases in the U.K., including London’s Stansted airport, in reaction to a business slump that the discount carrier doesn’t expect to rebound for another three years.

Europe’s second-largest budget airline said in a statement that it had begun a formal consultation with unions, which separately put the number of jobs at stake at 727 pilots. The Balpa union, which represents the carrier’s pilots, said the carrier had said about a third of its 2,300 pilots were at risk of redundancy, though EasyJet is working with employee representatives to minimize job losses

Last month, EasyJet said that about 30 per cent of its 15,000 workers may face redundancy as the carrier attempts to slash costs in preparation for a slow return to 2019 demand levels. Rivals British Airways and Ryanair Holdings Plc plan to let go of a combined 15,000 workers. EasyJet said in the statement that it expects to fly fewer aircraft and consequently needs fewer employees.

EasyJet was among the first European airlines to begin building up services as lockdowns eased, resuming domestic flights in the U.K. and France. The number of British airports served will increase to 14 from next week, with more international flights added later. EasyJet plans to operate 50 per cent of its usual routes in July and 75 per cent in August, though lower frequencies mean third-quarter capacity will be down about 30 per cent.

Last week, the carrier announced it had raised about 419 million pounds (US$520 million) in a share sale, padding its coffers for the gearing up of flights as the European aviation sector emerges slowly recovers. Following the share sale, EasyJet said it will had more than three billion pounds of cash.