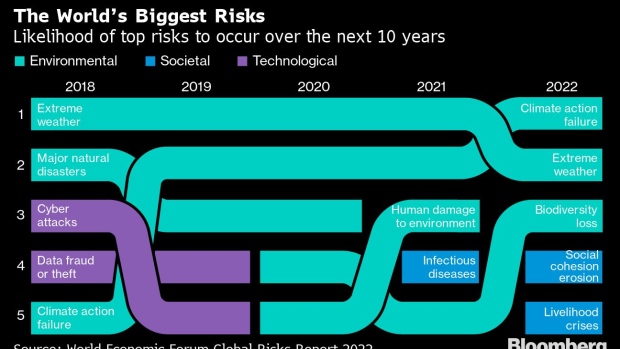 (Bloomberg) -- Europe’s banks will be told to brace for a much more rapid fallout from global warming than previously assumed, according to people familiar with the design of this year’s climate stress tests.

European Central Bank stress tests due to start this quarter will ask banks to gauge the impact on their books of governments failing to mitigate climate change. In that scenario, they’re being asked to prepare for conditions expected for 2080 four decades earlier, according to people with knowledge of the matter. The ECB is expected to brief banks on the scenarios later this month, the people said.

European authorities are pushing lenders to prepare for potential losses from extreme weather or government policies that could put polluting corporate clients out of business. The ECB’s stress test is a key plank in ensuring banks grasp the risks they face after warnings from the watchdog that the industry is falling short.

Government inaction on global warming is one of several long-term scenarios included in the stress test. Last year, an ECB review estimated that the “extreme physical impact” of that “hot house world” would shrink Europe’s economic output by about 8% by 2080 compared with a scenario in which governments act. The ECB has said the results of that exercise would inform this year’s stress test, but stopped short of saying there would a direct read-across. While the numbers may differ, the scenario that runs to 2040 will take account of those views.

The risk that governments might not take adequate steps to fight climate change is far from theoretical. In fact, according to the latest annual Global Risks Report, published by the World Economic Forum, “climate action failure” is deemed the biggest global threat in the next decade.

The ECB sent banks the underlying scenarios earlier this month, followed by questionnaires for a wider review on climate that runs in parallel to the stress test, the people said. Last year, the watchdog assessed banks’ efforts to adjust their practices to manage climate risks and found that no lender is close to meeting all of the ECB’s expectations.

This year’s test includes assumptions on the gross domestic product of individual countries and prospects of various industries, with energy-intensive sectors suffering, according to the people familiar. It also includes substantial charges for real estate with low energy efficiency, they said.

The ECB has also told banks to make pessimistic assumptions in the shorter term, notably by simulating the consequences through 2024 of a $100 spike in carbon prices as well as the fallout from theoretical droughts and flooding this year, according to an outline of the test published in October.

Banks have questioned the reliability of the results, warning that they won’t have all the client data they need in time for this year’s stress tests, according to a survey of the industry conducted by Bloomberg last year.

“It will not be a walk in the park,” said Christine Van Rijsseghem, chief risk officer of Belgian lender KBC Group. Projecting the composition of a bank’s balance sheet several decades out is “not an easy exercise knowing that climate risk has so many different angles.”

Still, the test will be valuable because it helps banks understand how climate risk could affect them and the wider economy, she said at a conference earlier this week. “There is a high degree of certainty that some degree of physical and transition risk will materialize in the future,” she said.

The ECB has received hundreds of questions from banks since starting a Q&A last month, with several lenders querying formulations contained in relevant documents, said the people. Such exchanges frequently occur when the ECB conducts a large and complex exercise, they said.

The test runs from March to July with aggregate results due to be published in the third quarter.

The ECB has said that the stress test won’t have a direct impact on banks’ capital requirements. The central bank plans to eventually ask lenders to treat climate change as they would other risks.