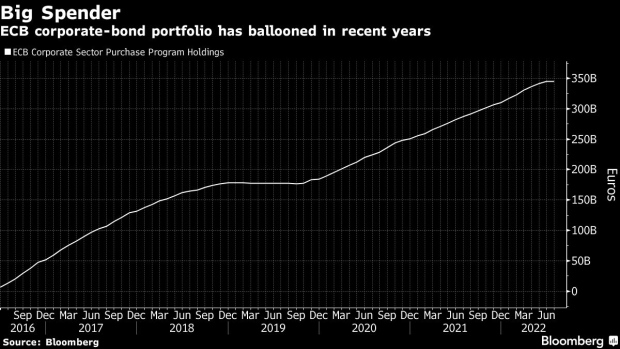 The European Central Bank (ECB) skyscraper headquarters building stands above commercial and residential property at dawn in Frankfurt, Germany, on Wednesday, July 25, 2018. The ECB president and his colleagues will set policy on Thursday, with analysts predicting the Governing Council will reaffirm that bond purchases will end in December and interest rates could start rising after the summer of 2019. Photographer: Alex Kraus/Bloomberg , Bloomberg

(Bloomberg) -- The European Central Bank’s “trailblazing” climate debt policies could push companies to change their environmental behavior as borrowing becomes more expensive, according to the investment-banking arm of Natixis SA.

The ECB plans to rejig its corporate bond portfolio to favor issuers that pollute less. The timing of the shift, when the central bank is also raising interest rates for its first time in over a decade, makes it “particularly groundbreaking,” according to a team of analysts.

“The ECB decisions mark a turning point as it could provide an unprecedented impetus to the transition towards a low-carbon economy,” said Myriam Azzouz and Cédric Merle, part of the bank’s Green & Sustainable Hub. The policies “may strongly incentivize corporates to improve their climate performance and transparency to hedge against rising interest rates and the end of accommodative monetary policies.”

The changes are set to start taking effect in October, with much of the fine print yet to be published. Policy makers said the climate plan will apply to some 30 billion euros ($30.5 billion) worth of reinvestments each year, or around 10% of the ECB’s corporate portfolio. Companies in the region are already increasingly turning to green debt.

The ECB’s policies may even go beyond the European Union’s push for sustainable finance by adding pressure on non-EU companies that issue bonds denominated in euros, the Natixis analysts said. Such are the benefits of the ECB’s buying, companies headquartered outside the euro area have structured debt sales to meet its criteria.

“Even though the primary responsibility for tackling climate change belongs to governments, the global and the all-encompassing nature of the challenge calls for a wider involvement of all policy makers including central bankers,” they said.