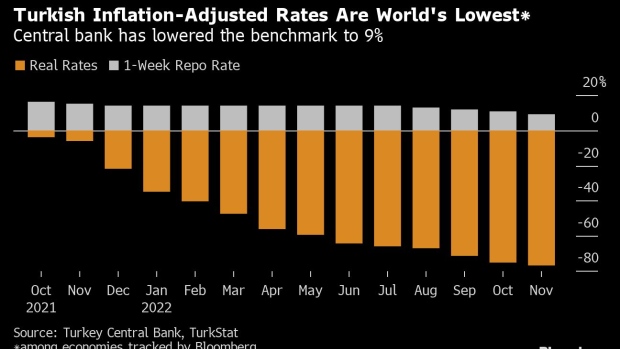 Christine Lagarde, president of the European Central Bank, during a Monetary Dialogue with the European Parliament Committee on Economic and Monetary Affairs at the European Parliament headquarters in Brussels, Belgium, on Monday, Nov. 28, 2022. Lagarde said she'd be surprised if euro-zone inflation had peaked, suggesting the recent ramp-up in interest rates isn't close to being over. , Bloomberg

(Bloomberg) -- If European Central Bank President Christine Lagarde and her colleagues need to hone the guidance about their final interest-rate increase for 2022, the window to do so is closing.

Wednesday will mark the final opportunity to give hints to investors on a hike in borrowing costs that might be a half point or 75 basis points. A tricky accord over how to unwind the ECB’s multi-trillion-euro balance sheet is also looming.

The pre-decision blackout period kicks in on Thursday for policymakers to stop commenting on monetary matters before their Dec. 15 meeting. The ECB can break its silence to massage expectations at the last minute, as it did in July, but that’s less optimal.

Just as the US Federal Reserve looks likely to switch to less aggression, investors anticipate a 50 basis-point rate increase in the euro zone after weaker-than-expected inflation data.

While ECB officials haven’t yet tried hinting otherwise, markets still shows a small chance of a third consecutive 75 basis-point move. That may give them leeway to do such a hike without sending a signal ahead of time, even if it springs more of a surprise.

Money markets on Friday were pricing a 54 basis-point increase, down from as much as 67 basis points reflected a month ago, showing how they’re leaning more toward 50 bps.

Only a few, final appearances are scheduled for this week, with Lagarde featuring at two: one about climate change, and the second -- on Thursday, during the blackout period -- on financial stability.

“Decelerating euro-area inflation reinforces our view that the ECB will slow the pace of rate hikes on Dec. 15 to 50 basis points, from 75 basis points. Still, any sense of relief at the ECB will be tempered by the fact that underlying pressures remain strong.”

Aside from German economic data, officials are awaiting their own survey of consumer inflation expectations, as well as a tally of how much of the ECB’s long-term loan program will be repaid at the second opportunity for banks to do so.

If that number, due on Friday, is large, it may point to progress toward shrinking the bank’s balance sheet just as talks to do so intensify. Also relevant will be data on Tuesday showing the flexible use of pandemic emergency reinvestments -- a tool to smooth speculation in fiscally weaker countries’ bonds.

Behind the scenes, final touches to the ECB’s quarterly economic forecasts will also be made in preparation for the forthcoming decision.

Elsewhere, further rate hikes from Australia to Canada, and US data showing a slowdown in producer-price inflation, will be among the events keeping investors busy.

Canada and the US

The Bank of Canada is set to wind down one of the most aggressive rate hiking cycles in its history, but markets and economists are split on whether policymakers, led by Governor Tiff Macklem, will deliver a half or quarter percentage-point increase before bracing for an impending economic downturn.

In the US, the economic data schedule quiets down and Fed officials are in a blackout period ahead of their final policy meeting for 2022 the following week.

Central bankers should get more favorable inflation news from the producer price index on Friday. The November PPI is forecast to rise a little more than 7% from a year ago, down from the 8% rate a month earlier. The core measure, which excludes food and energy, is also projected to cool.

While still elevated, moderating inflation in the production pipeline can help alleviate price pressures at the consumer level. Also Friday, investors will parse the University of Michigan’s consumer sentiment survey to get a sense of household inflation expectations.

Among other data is the Institute for Supply Management’s survey of service providers and the Labor Department’s weekly jobless claims.

Australia’s central bank chief Philip Lowe is likely to raise rates by a quarter-percentage point on Tuesday as the Reserve Bank tries to engineer a soft landing for the economy with smaller hikes, amid early signs inflation is starting to slow.

Growth figures out the following day will show how Australia’s economy fared in the third quarter.

Japanese household spending and wage figures will provide the latest gauge of how the strongest inflation in four-decades is crimping expenditure and squeezing family budgets.

Amid debate over the Bank of Japan’s 2% price goal, BOJ board member Toyoaki Nakamura lays out the bank’s latest thinking in a speech on Wednesday.

India’s central bank is poised to increase its key rate for a fifth time this year to steer inflation back to target.

With most observers forecasting a German recession, manufacturing data will show how one part of Europe’s biggest economy started the fourth quarter. Factory orders are released on Tuesday and industrial production on Wednesday. For the latter, economists anticipate a decline in output in October.

Among euro-zone statistics will be a breakdown of gross domestic product from the third quarter, showing expenditure components from consumer spending to investment.

A quieter week for the UK will feature the RICS house-price report on Wednesday, which is likely to reaffirm the slump taking hold there, and the Bank of England’s inflation expectations survey on Friday. Policy makers will stay silent ahead of their Dec. 15 decision.

In Norway, where inflation hit a 35-year high in October, the reading for November will be released on Friday. The strength of price pressures previously raised speculation that the central bank may need to ramp up its rate hikes.

Meanwhile, Hungarian inflation on Thursday is poised to accelerate further toward the highest level in the European Union after the likely removal of caps on fuel and food costs.

Three European monetary decisions will draw attention. Poland’s central bank will likely keep rates unchanged on Wednesday for a third month, betting that inflation will start to ease. Its Serbian counterpart may hike further, while a decision is also due in Ukraine.

Turkish inflation data on Monday are expected to show a slight slowdown in November from 85%. It’s still the highest inflation rate in the G-20 after Argentina, and the hit to consumer spending is countering the effect of four back-to-back rate cuts, which have so far fallen short in giving impetus to Turkey’s $800 billion economy.

Data on Tuesday will likely show South Africa’s economy grew an annual 2.1% in the third quarter and shrank 0.2% quarter-on-quarter, entering a recession. That’s after Eskom Holdings, the state-owned power company that generates most of the nation’s electricity, implemented record power rationing.

Egyptian inflation due Thursday will show an acceleration after a currency devaluation. Saudi Arabia is expected to announce its final 2023 budget figures after a bumper year for oil revenues.

Mexico’s November consumer price data are likely to confirm that inflation has peaked, with early forecasts seeing sub-8% year-on-year prints but a 24th straight rise in core readings to above 8.5%.

In Colombia, the piping hot economy likely pushed up consumer prices yet again, with an early consensus above 12.3%.

While the direction of travel isn’t in doubt, preliminary estimates suggest Chile’s consumer prices may have inched back up in November after a dramatic slowing from August’s 14.1% print.

However unwelcome that may be, Banco Central de Chile, led by President Rosanna Costa, is all but certain to hold its key rate at 11.25% on Dec. 6.

In Peru, November’s surprise jump in prices will probably persuade the central bank to go for a 17th straight rate hike on Dec. 7 from the current 7.25%.

For its final meeting of 2022 this week, Banco Central do Brasil is locked in on 13.75%, where an 1,175 basis-point hiking cycle left it in August. Analysts polled by the bank expect a long period of restrictive policy with just 225 basis points of easing in 2023.

Inflation in Latin America’s biggest economy may have slowed below 6% last month, down from April’s 12.13%, but double-digit core readings will likely push the central bank into higher-for-longer mode.