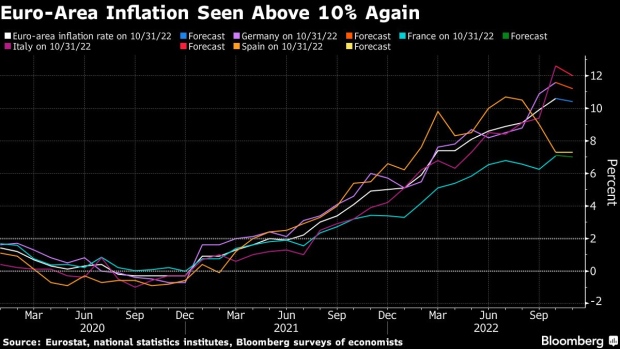 Klaas Knot, president, De Nederlandsche Bank N.V., speaks during the Institute of International Finance (IIF) annual membership meeting in Washington, DC, US, on Wednesday, Oct. 12, 2022. This year's conference theme is "The Search for Stability in an Era of Uncertainty, Realignment and Transformation." , Bloomberg

The Dutch central bank chief said that while the ECB’s projections see price growth easing to near the 2% target in 2024 from more than five times that at present, risks to the outlook “are entirely tilted to the upside.”

“In Europe, we have to prepare ourselves for a protracted period in which policy makers and central bankers will have to be on it and focus on restoring price stability,” he said Monday in Paris. He called any talk of over-tightening at this point “a bit of a joke.”

With hawks like Knot having driven back-to-back rate increases of 75 basis points, attention is shifting to whether the ECB will opt for a third when it meets in mid-December. While price growth may dip a touch this month, some say the threat of a downturn for the 19-nation euro-zone economy is grounds to slow the pace of hikes.

Knot said it’s not a “foregone conclusion” that there’ll be a recession, but “we will get weaker growth -- that’s for sure.”

The biggest danger, according to Knot, is declaring victory over inflation too early and easing off on monetary-policy tightening before the job is done -- a risk his Estonian colleague Madis Muller warned about on Friday.