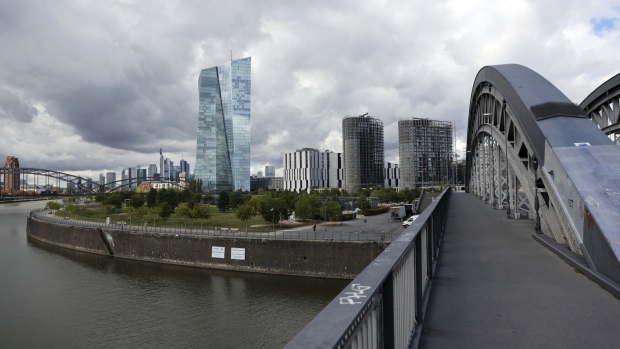 A railway bridge over the River Main near the European Central Bank (ECB) headquarters in Frankfurt, Germany, on Thursday, Sept. 8, 2022. The ECB is on the brink of a jumbo three-quarter-point increase in interest rates to wrest back control over record inflation, even as the risk of a euro-zone recession rises. Photographer: Alex Kraus/Bloomberg , Bloomberg

(Bloomberg) -- The European Central Bank will raise borrowing costs next month by at least a half-point as inflation pressures worsen, according to Governing Council member Gediminas Simkus.

“Based on data I see now, the inflationary trends are intensifying,” the Lithuanian central bank chief told reporters Monday in Vilnius. “There are a few options on the table” for the interest-rate increase in October, the lowest of which is 50 basis points.

Other factors will also influence decision-making -- including price expectations and employment, he said.

This week will see the release of September inflation data that are expected to set another record at almost five times then ECB’s 2% target for price growth over the medium term. Simkus’s Latvian colleague, Martins Kazaks, said last week that he currently favors a repeat of this month’s historic 75 basis-point hike.

Speaking later to Bloomberg, Simkus said a contraction in Europe would “have a dampening effect on inflation.” But, he added, that “doesn’t mean the Governing Council shouldn’t take decisions.”

They could include paring back the trillions of euros of bonds the ECB accumulated during recent crises -- a process known as quantitative tightening.