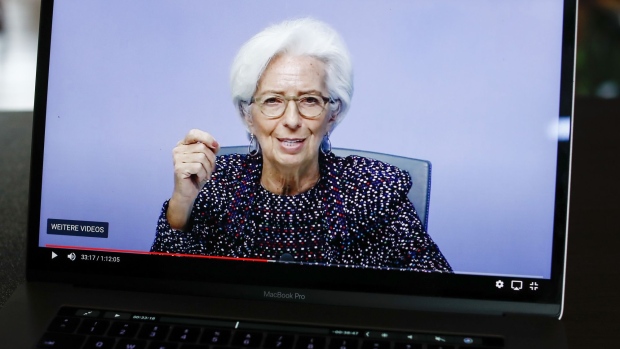 European Central Bank President Christine Lagarde’s signature crisis-fighting tool is becoming the focus of disagreement among policy makers in what could amount to her first major test of discipline.

Governing Council members face a potential rift over how much their emergency bond-purchase program should stay weighted toward weaker countries such as Italy, according to multiple conversations with central-bank officials.

While the debate remains hypothetical for now, it could crystallize as the economy emerges from the coronavirus pandemic. The danger is that such friction undermines a program unveiled at the height of the crisis to reassure investors of the ECB’s resolve in defending the integrity of the euro.

The officials asked not to be named because of the confidentiality of internal discussions. An ECB spokesman declined to comment.

The internal mood is reflected in differing public comments by the central-bank heads of the euro zone’s two biggest economies: Germany’s Jens Weidmann and France’s Francois Villeroy de Galhau. Other Governing Council members hold similar views to them on either side of the debate, according to the officials.

The prospect of disagreements might evoke memories of the discord that punctuated the eight-year reign of Lagarde’s predecessor, Mario Draghi. The bond-buying tool he developed during the euro-area debt crisis and his later pursuit of quantitative easing both met bitter German opposition.

At the core of the current argument is the much-touted flexibility of the pandemic emergency purchase program. Lagarde proclaimed it to have “no limits” after she corralled colleagues into agreeing to the measure during a late-night emergency session in mid-March.

It allowed the ECB to skew purchases toward Italy, one of the worst-hit countries, as bond yields there started to surge, averting the kind of debt crisis that almost splintered the bloc in 2012.

But it also meant deviating from a rule intended to keep the ECB in line with a European Union law that bans it from financing government spending. The so-called capital key links bond programs to the relative size of each economy -- more German than Italian debt is bought regardless of economic conditions -- and was a fundamental reason the EU’s top court ruled an earlier program legal in 2018.

Moreover, while the ECB repeatedly says the emergency program is temporary, it also pledges to keep going “until it judges that the coronavirus crisis phase is over” -- a vague term that could be open to wide interpretation.

Weidmann, president of the Bundesbank, wants to limit the plan’s scope amid concern that too much leeway could backfire, while his opposite number at the Bank of France has championed maximum flexibility to channel support to those needing it most.

“Clinging to the capital keys to determine each country’s purchase amounts would be an uncalled-for constraint that would undermine the very effectiveness of our intervention efforts,” Villeroy said on May 25. “Certain national central banks must be able to purchase significantly more, and others significantly less.”

Villeroy is practicing what he’s preaching. The first breakdown of purchases by country in early June showed France undershot its quota by more than 10 billion euros (US$11.2 billion).

Weidmann supported the program because of the sheer scale of the economic shock. But he also insists that it must either be temporary or, if it morphs into yet another long-lasting stimulus tool, adhere to rules such as the capital key.

In a speech last month, he argued that governments mustn’t rely on the ECB to keep financing costs low forever.

“‘Flexible’ doesn’t mean ‘unrestricted’,” he said. “It’s important to me that monetary policy doesn’t set wrong incentives for public finances. In this context, the capital key offers the ECB a sensible guideline for pandemic emergency purchase program holdings at the end of net purchases.”

After so much over-buying of Italian bonds, rebalancing the 1.35 trillion-euro program by the end of net purchases, currently scheduled for June next year, would be tough. It risks driving Italian yields higher, worsening the sustainability of that nation’s debt.

The account of the latest policy meeting, when the program was almost doubled in size and extended, showed that a decision to reinvest the proceeds of maturing debt until at least the end of 2022 was made in part to allow more time to bring total holdings back in line.

Weidmann’s tough interpretation of the rules pre-dates this crisis and often caused friction under Draghi, but the issue was thrown into sharp relief in early May when Germany’s constitutional court said an earlier bond-purchase program might be illegal. The standoff was only resolved on Thursday, when German lawmakers decided the ECB’s efforts were proportionate to the economic challenges.

While the court’s surprise decision wasn’t about the capital key, the judges did note how critical the guideline is for preventing monetary financing. One of Germany’s political parties subsequently pledged to launch a legal challenge against the newer program.

The ECB’s Governing Council will next meet in two weeks, giving officials another chance to hash out their differences over what should happen when the economic crisis finally eases.