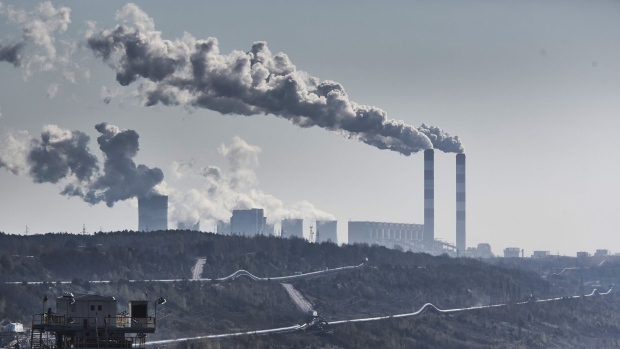 (Bloomberg) -- The European Central Bank is stepping up pressure on lenders to prepare for stress tests next year that will show just how vulnerable the industry is to climate change, according to people familiar with the process.

The ECB, which earlier this year voiced displeasure over finance industry efforts to respond to climate risks, has sent out confidential documents to banks stating they’ll need to provide data on how their balance sheets might fare through 2050, the people said. The regulator also plans to study the link between profits and carbon risk in banks’ portfolios, they said.

In Europe, politicians want banks to become a key plank in the fight against climate change by steering capital away from polluters. Companies in the region, unlike their peers in the U.S., tend to rely more on their lenders than on capital markets for financing. Investors are taking note as banks burdened by carbon-intensive loan books may face higher capital requirements, which could erode their power to pay dividends.

A methodology for banks may come by October, according to one of the people. Banks will have to supply the ECB with information that shows how their portfolios might evolve over periods of 10, 20 and 30 years, said the people, asking not to be identified as the documents are private. An ECB spokesman declined to comment.

The power of environmental, social and governance standards to disrupt the financial industry played out publicly last month as investors dumped shares of DWS Group after it became the target of investigations for alleged greenwashing. Though DWS says it did nothing wrong, the development shows that financial firms, whether banks or asset managers, can no longer afford to underestimate ESG compliance.

The ECB has said its supervisory arm’s stress test next year will rely on banks’ assessments of their exposure to climate change and their readiness to address it. The test will also be informed by this year’s economy-wide exercise. The outcomes will be reflected qualitatively by potentially affecting the scores used to calculate individual banks’ capital requirements. Yet the ECB has made clear that it will gradually start to treat climate as it would any other risk by reflecting it in those requirements.

The ECB said in July that hardly any euro-zone banks were adequately prepared for the risks they face from climate change. It will give banks individual feedback on their plans for addressing the deficiencies identified in the self assessments in September, one of the people said.

A broader assessment currently under way at the ECB is set to underscore the financial industry’s exposure to global warming. The average default probability in loan portfolios of the 10% of euro-area banks most vulnerable to climate risks could rise by 30% by 2050, according to preliminary findings from the ECB’s economy-wide stress test.