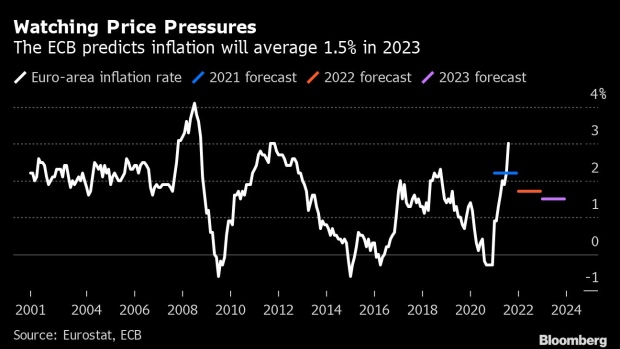 The European Central Bank will discuss boosting its regular asset purchases once the pandemic-era emergency stimulus comes to an end, but any such increase is uncertain, Governing Council member Madis Muller said.

While the euro area’s recovery should allow the ECB to end its 1.85 trillion-euro ($2.2 trillion) pandemic bond-buying program in March, officials will discuss how to avoid derailing the rebound when support is pulled back. One option would be to expand the pre-crisis plan above the current 20 billion euros per month, Muller said in an interview in Tallinn.

His remarks point to the potentially contentious debate that awaits policy makers, especially those who worry that a return to the pre-Covid set-up would hit heavily indebted countries not yet ready to function without extraordinary ECB support.

“I realize that it would be a problem if there is a very sharp cliff effect at the end of the pandemic emergency purchase program,” the Estonian central bank chief said.

A potential increase in the older quantitative easing program is “part of the discussion we will have on how to phase out PEPP and what it would mean for asset purchases going forward,” he said. “And of course the decision will depend on market conditions next spring and the economic outlook at that point.”

Muller’s Greek counterpart, Yannis Stournaras, this week cautioned against drawing early conclusions about ending crisis aid, saying it would be “really arrogant on our part to declare victory” already.

Yet others have sounded optimistic about the euro area’s prospects recently. Executive Board member Isabel Schnabel said Monday that the recovery is well on track, and Vice President Luis de Guindos pointed to a strong performance in the second and third quarter.

“Given the recovery that we’re seeing in the economy, also the outlook for inflation and most importantly the extremely favorable financing conditions that we continue to have in the euro area, we should be able to end PEPP in March as it has been communicated and as it has been the original plan,” Muller said. “If you ask what is the most likely outcome then to me personally, this is the base case.”

Like other Governing Council members, he also said he’s skeptical about the idea of redesigning the old program to include more flexible features that helped the ECB cushion the blow of the pandemic.

“I think we need to be careful there because we might be running into some legal constraints,” Muller said. “I don’t think we can take the flexibility that was there for PEPP and just transfer it to the previous asset purchase program. It was warranted in this particular pandemic-related crisis situation.”

On inflation, Muller said he agrees with views that prices will accelerate faster than current ECB projections indicate.