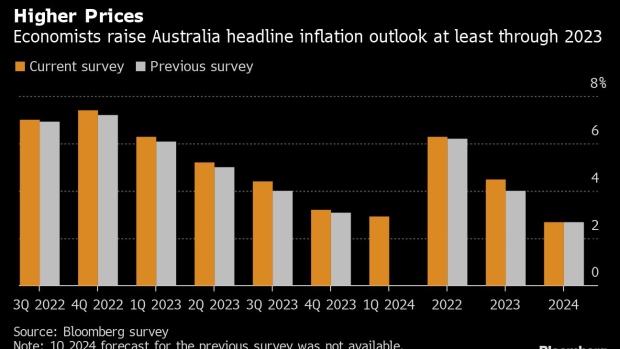 (Bloomberg) -- Economists raised their forecasts for Reserve Bank of Australia policy tightening as they boosted expectations for household spending amid a very tight labor market and elevated savings levels.

The RBA will raise its cash rate by a further 75 basis points over the final three months of this year to 3.1%, versus a previous 2.85%, according to the median estimate in a Bloomberg survey. Economists now see a peak of 3.35% in the first quarter after significantly upgrading consumption forecasts.

“We expect the RBA, under pressure from sticky annual inflation above 3% over the forecast period, to lift and keep the cash rate above 3%,” said Stephen Roberts at Laminar Capital. That will cause “a marked moderation in economic growth.”

Australia’s central bank is in the midst of its sharpest policy tightening cycle in a generation, having hiked by a half-percentage point at its past four meetings to take the cash rate to 2.35%. Governor Philip Lowe has signaled a potential step down in the size of rate rises ahead, though a number of economists only expect that shift to occur in November.

The statistics bureau will release third-quarter inflation data on Oct. 26 that’s expected to show a further acceleration in prices, with the RBA forecasting a peak of just under 8% late this year. Economists also upgraded their inflation forecast to 7.4% in the final three months of the year.