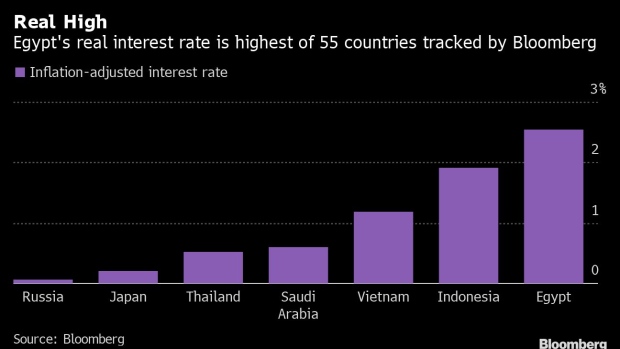 The central bank maintained the benchmark deposit rate at 8.25% and the lending rate at 9.25%, the Monetary Policy Committee said in a statement. All 13 economists surveyed by Bloomberg predicted what is Egypt’s seventh consecutive hold, after combined cuts of 400 basis points last year.

Read more: U.S. INSIGHT: Devil Is in the Fed Taper Signal, Not the Details

The decision leaves the North African nation with the highest inflation-adjusted interest rate of more than 50 economies tracked by Bloomberg. That may help keep its local debt attractive to foreign investors even if Fed tapering leads advanced economies to tighten monetary policy and offer increasingly competitive yields.

Overseas investors hold around $33 billion of Egypt’s Treasury bills and bonds, an important buffer for the most populous Arab nation as tourism awaits a full recovery from the coronavirus pandemic.

Egypt has withstood a rise in global commodity prices, with inflation remaining within the central bank’s 5%-9% target range. Analysts expect it to slow by year-end.

“The Fed’s tapering would usher in the beginning of the end of the low-interest rate environment that benefited emerging markets over the past decade,” Mohamed Abu Basha, head of macroeconomic research at Cairo-based investment bank EFG Hermes, said before the decision.

A reversal would “pose some challenges to EM, especially those that relied heavily on capital inflows to fund their twin deficits,” he said, predicting the policy rate will remain on hold until June 2022.

The latest U.S. job reports have cast doubt over when tapering will occur, but “the central bank is likely to remain anxious about the Fed’s next move,” Abu Basha said.