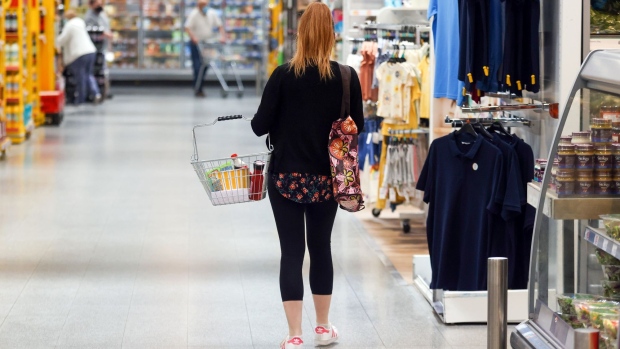 A customer passes along the central aisle of a Morrisons supermarket, operated by Wm Morrison Supermarkets Plc, in Saint Ives, U.K., on Monday, July 5, 2021. Apollo Global Management Inc. said Monday it's considering an offer for Morrison, heating up a takeover battle for the U.K. grocer. Photographer: Chris Ratcliffe/Bloomberg , Bloomberg

(Bloomberg) -- More than eight in 10 U.K. adults reported an increase in their cost of living this month, official figures show.

That compares with around six in 10 in November, with food, domestic energy and auto fuel the most commonly cited reasons for rising bills in the early months of 2022, the Office for National Statistics said Wednesday.

More than half expected to respond to the pressure of family budgets by spending less on discretionary items, while a third intended to shop around more, use less gas and electricity, and cut back on food and essentials.

The study also found almost 30% of adults saying their household could not afford an unexpected but necessary expense of 850 pounds ($1,117).

Adults on the lowest incomes, those renting their homes or those with no formal qualifications were most likely to struggle, particularly outside of London, the South East of England and the South West.