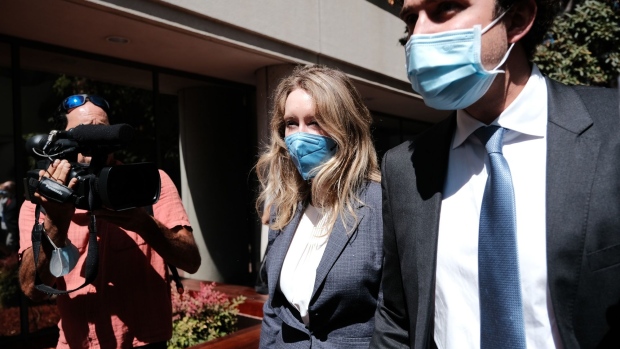 A lawyer for Theranos Inc. founder Elizabeth Holmes sought to undercut the testimony of a former employee turned whistle-blower by emphasizing how far down the company hierarchy she was from the boss.

But defense attorney Lance Wade had his work cut out for him trying to poke holes in Erika Cheung’s explosive claims that the blood-testing startup deceived patients and regulators with an approach so crude in how it shoved aside basic scientific norms that it jeopardized patient health.

Holmes, 37, is fighting a dozen counts of fraud and conspiracy for allegedly lying to patients and investors about the capabilities of Theranos machines and the company’s financial health. The narrative Cheung laid out for the jury Tuesday and Wednesday formed the basis of a best-selling book, an HBO documentary, multiple podcasts and a forthcoming feature film about the downfall of Theranos after its valuation peaked at US$9 billion.

“I was really stressed and uncomfortable with what was going on,” Cheung told jurors, claiming that the accumulation of practices she detected at Theranos were so wrong they drove her to quit. “I was attempting to tell as many people as I could but not seeming to get through."

One Theranos employee she connected with was Tyler Shultz, the grandson of former Secretary of State George Shultz, who served on the company’s board. Jurors were shown an April 2014 email Tyler wrote to Holmes and shared with Cheung. The five dense paragraphs in that message detailed serious problems with lab testing practices that echoed Cheung’s concerns.

The pair had dinner at George Shultz’s home where, Cheung said, they explained myriad problems with Theranos hardware, software and quality control -- all of which were at odds with how Holmes and the company were promoting the technology.

“‘What they’re telling you is not actually what’s going on internally,’” Cheung said. “That’s essentially what I told George Shultz.”

Wade had tried to block some portions of Cheung’s most dramatic testimony beforehand. But most of his objections were overruled by U.S. District Judge Edward Davila.

The lawyer began his cross-examination by pointing to Cheung’s junior status at Theranos relative to other employees with deeper credentials in science and medicine.

The attorney didn’t appear -- yet -- to be trying to portray Cheung as too green to critique the company’s lab practices. Rather, he was showing how distant she was from Holmes -- who can’t be convicted for wrongdoing that isn’t directly tied to her.

Cheung parried the inquiries, in moments seeming to disarm Wade with her acknowledgment that as a lab associate just out of college with a bachelor’s degree, she was permitted to run what she said were “very low complexity” tests. Senior positions at Theranos required advanced degrees, Cheung said.

When the trial resumes Friday, Wade’s task of deflecting her testimony may get harder still. Cheung told jurors that her concerns about Theranos were so grave that she filed a complaint with regulators whose investigation of the company’s practices resulted in Holmes being banned from running a laboratory company for two years. Theranos also had to retract or correct the results of tens of thousands of blood tests.

Wade will also have to overcome Cheung’s description of how Theranos hired litigator David Boies to silence her. Jurors were told that at Cheung’s new job after Theranos, a man waited in a car all day to hand-deliver a letter from Boies accusing her of stealing trade secrets and defaming the company.

Cheung told jurors she expected to be sued for talking to John Carreyrou, a former Wall Street Journal reporter, whose stories first exposed the problems with Theranos machines. She offered only an altruistic explanation for why she talked to him.

“I felt hopeful that people could see the truth of what’s going on at the company,” Cheung said. Talking to the journalist was her “final resort to get the truth out about what happening to all these patient samples,” she said.