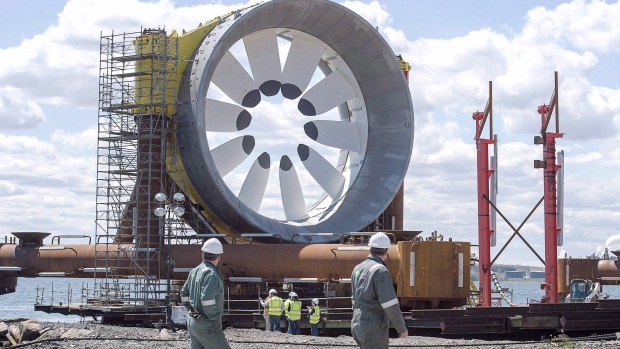 A turbine for the Cape Sharp Tidal project is seen at the Pictou Shipyard in Pictou, N.S. on Thursday, May 19, 2016. , THE CANADIAN PRESS/Andrew Vaughan

That contributed to company-wide adjusted net earnings of $167 million versus $137 million a year earlier.

The per share equivalent of 71 cents for the most recent quarter beat expectations of 67 cents per share, according to Thomson Reuters Eikon.

"As I look forward to 2019, I'm excited about the long-term growth opportunities in front of us at Emera," said CEO Scott Balfour on a conference call.

"Over the next 12 months, we have a visible plan to invest $2.3 billion across the utilities driven by our investments in Florida and smart meters at Nova Scotia Power and Tampa Electric."

Emera holds investments in power generation and electricity and gas transmission and distribution in Canada, the United States and four Caribbean countries.

The company has added 320 megawatts of solar power, comprised of 3.2 million solar panels, with a further 280 MW to be installed over the next two years in the Tampa, Fla., area, Balfour reported.

It expects an additional 85 megawatts to come into service by the spring. Solar-related revenues are expected to be US$70 million in 2019, delivering net earnings of US$30 million.

In November, Emera announced a deal to sell its three natural gas-fired power plants in New England to an affiliate of the Carlyle Group for about $780 million, expected to close by the end of the first quarter.

Other asset sales as part of the company's overall funding plan are progressing well and it expects to post an announcement by the spring and complete its sales program by the end of the year, it said.

Emera reported net earnings of $231 million in its latest quarter compared with a net loss of $228 million -- mainly due to a $317-million charge because of the revaluation of U.S. non-regulated deferred income taxes -- in the same quarter a year earlier.