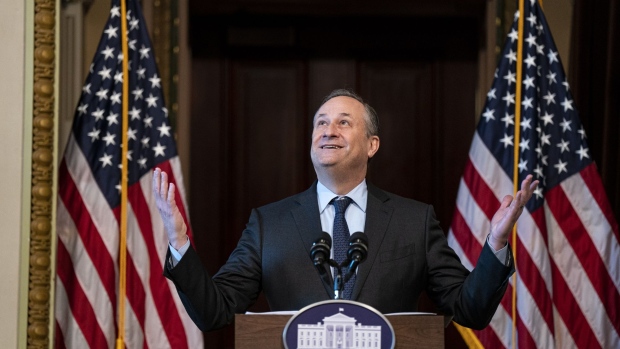 Second Gentleman Doug Emhoff speaks during a naturalization ceremony for candidates to become US citizens at the Eisenhower Executive Office Building in Washington, DC, US, on Friday, Jan. 13, 2023. The ceremony is marking National Religious Freedom Day with 15 candidates being sworn in from 15 different countries. , Bloomberg

(Bloomberg) -- Over a century after his great-grandparents fled Europe to escape religious persecution, Second Gentleman Doug Emhoff is returning to the sites of some of the Holocaust’s greatest atrocities.

Emhoff, the first Jewish person to be married to a US president or vice president, aims to reassure Jewish communities in Poland and Germany that the Biden administration stands with them in the fight against antisemitism following a spate of high-profile incidents in the US involving former President Donald Trump and Ye, the rapper formerly known as Kanye West.

Emhoff, 58, has used his historic role to take an increasingly vocal stance against anti-Jewish hatred and will convey to leaders in other countries the US commitment to combating antisemitism while encouraging them to step up their own efforts.

The overseas six-day trip, which begins Thursday, is one of the most ambitious ways Emhoff has sought to advance that effort, and arguably his most high-profile solo endeavor of President Joe Biden’s tenure.

Senior administration officials highlighted the historic and personal nature of Emhoff’s trip, reiterating that his great-grandparents fled to the US from what is now Poland about 120 years ago.

On Friday, Emhoff will visit the Auschwitz-Birkenau death camp outside Krakow, Poland, with Holocaust survivors to mark International Holocaust Remembrance Day. At Auschwitz, Emhoff will participate in wreath-laying and candle-lighting ceremonies, and in the evening will attend a Shabbat dinner with members of Krakow’s Jewish communities. Senior officials said Emhoff would use the visit to push back on Holocaust denial and disinformation.

Read More: Emhoff Vows to Use Historic Perch to Take On Rising Antisemitism

Emhoff also plans to visit historic and cultural sites in Poland and Germany, to pay homage to the long history of Jewish life in Europe, officials said, including on Saturday, the factory operated by Oskar Schindler whose story was popularized by the 1993 film “Schindler’s List.”

There, Emhoff will speak about the legacy of Schindler and other “righteous Gentiles” who helped save lives during the Holocaust and host a roundtable with local community leaders. He will also meet with Jewish community leaders in Gorlice, Poland.

Biden in December formed an inter-agency group to coordinate the US response to antisemitism and tasked it with developing a national strategy. Hearing from leaders in other countries will help inform the administration’s efforts to craft a national action plan against antisemitism, according to a senior administration official.

Earlier: Growing Antisemitism in the US Is Seeping Into the Workplace

Emhoff has spoken out about the spread of antisemitism after a spate of incidents that shook the US Jewish community.

Trump met at his Florida estate last November with Nick Fuentes, a White nationalist and Holocaust denier, and Ye, who praised Adolf Hitler. National Basketball Association star Kyrie Irving also promoted an antisemitic film on social media. Twitter Inc. has also come under fire for increasing levels of antisemitic and other hate speech on its platform after chief executive Elon Musk pushed to restore people whose accounts had been suspended.

Emhoff convened a roundtable with American Jewish community leaders at the White House last month and met earlier this month with leaders of a bipartisan House task force on combating antisemitism.

“As long as I have this microphone, I’m going to speak out against hate, bigotry, lies,” he said in December.