The roughly one-year delay to Enbridge Inc.’’s (ENB.TO) expansion of its Line 3 conduit, announced last week, threatens to prolong a shortage of pipeline space that has made it difficult for Canada’s drillers to ship their crude to refineries. That pinch caused a crisis in the industry last year, sending local oil prices to record lows and prompting the government of Alberta to embark on an unprecedented intervention in the market.

Enbridge’s Line 3, which would help move 370,000 more barrels of crude out of Alberta, is particularly important because the province’s government was counting on it to help end mandated production cuts. The delay may scramble plans for drillers who were counting on the line and shift investors’ focus to efforts by producers and Alberta’s government to move more crude by rail.

“While this represents a setback for the Enbridge Line 3 pipeline, we do not waver in our confidence that this project will be completed,” Michael McKinnon, a spokesman for Alberta’s energy ministry, said in an emailed statement. “As we lead the charge for pipelines, this kind of uncertainty is exactly why we have a plan to move more oil by rail until new pipelines are built.”

Alberta announced a plan last month to invest $3.7 billion to lease 4,400 rail cars, buy crude from local producers and sell it to refiners across North America. The government expects to turn a $2.2 billion profit on the plan through service revenue and increased royalties. 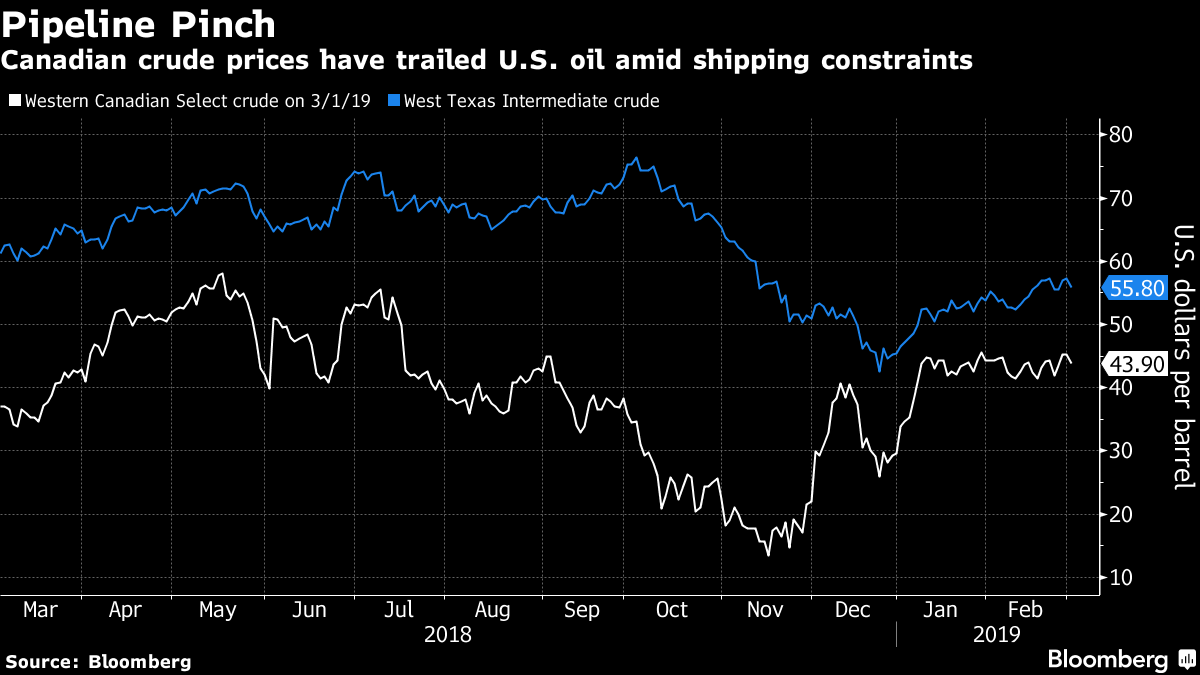 The government last year announced that it would require producers to cut about 325,000 barrels of daily production, roughly 9 percent of the province’s output, to drawn down storage tanks that filled up as new oil-sands projects came online.

The plan was for the government to dial back the production cuts as the year went on and more rail capacity became available, then end them entirely when Line 3 went into service. With the Line 3 project delayed, rail shipping becomes even more critical.

Still, rail is a more expensive method of transporting crude than pipelines, and Canadian producers had been eagerly awaiting the Line 3 startup this year. The project, previously slated to start shipping crude in the fourth quarter of this year, is now expected to enter service in the second half of 2020, Calgary-based Enbridge said Friday. The company’s shares dropped as much as 4 percent in Toronto trading on Monday.

Construction is being pushed back because the Minnesota permitting process won’t be complete until November, and the federal permits won’t be received until as long as 60 days after that.

The postponement of the $9 billion Line 3 expansion is the latest setback for Canada’s energy industry. TransCanada Corp.’s Keystone XL has been on the drawing board for more than a decade amid environmental and landowner opposition. The Trans Mountain expansion, which Canada’s government bought from Kinder Morgan Inc. to save it from cancellation, has been stalled amid legal challenges.

The industry also has been hit in recent years by the cancellation of TransCanada’s Energy East pipeline and the Canadian government’s rejection of Enbridge’s proposed Northern Gateway conduit.

The replacement and expansion of Line 3 would help ship more crude along a 1,031-mile (1,659-kilometer) route from the Alberta oil hub of Hardisty to Superior, Wisconsin. Construction is already finished in Wisconsin and largely completed elsewhere along the route. Enbridge had said as recently as Feb. 15 that it expected to bring the project into service this year.