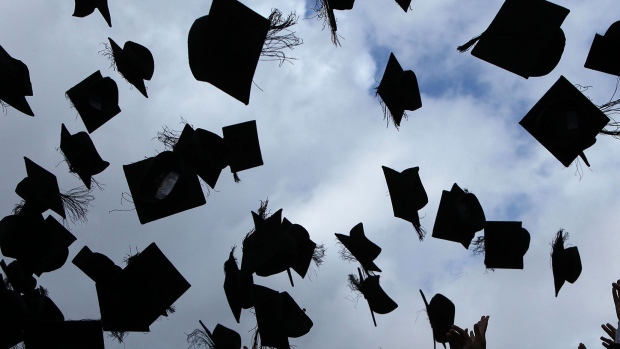 Students throw their mortarboards in the air during their graduation photograph at the University of Birmingham degree congregations on July 14, 2009 in Birmingham, England. , Photographer: Christopher Furlong/Getty Images

(Bloomberg) -- U.S. consumers will have to resume making payments on their Federal student loans when a Covid-related relief program expires on Sept. 30, and some borrowers may struggle to pay all their debts at that point.

That could spill over into bonds backed by private student loans, as well as auto loans and credit cards, which have performed unexpectedly well over the last year as Covid stimulus and debt relief programs have helped borrowers pay their bills, or skip payments.

When consumers have to resume making payments on federal student loans, there probably won’t be significant market disruption for bondholders, but investors need to be mindful of a bumpy road ahead, Bank of America analysts warn. Many borrowers have private loans for higher education in addition to federally backed debt.

“If someone has to restart their payments on high-balance federal student loans, it may put pressure on their overall finances -- including their private student loans -- which extends to other areas of consumer asset-backed securities, such as auto loans and credit cards,” said Theresa O’Neill, ABS strategist at Bank of America.

To be sure, other factors may mitigate the possible negative performance.

“A lot of people have increased their savings over the past two years and that can serve as an added layer of protection should these programs expire,” Brian Wiele, head of securitized product syndicate at Barclays, said in an interview.

Several members of Congress are looking for President Biden to further extend the program until March 31, 2022. On Wednesday, Senate Majority Leader Chuck Schumer and progressive Senator Elizabeth Warren warned that the U.S. economic recovery could take a major hit if the Biden administration fails to extend the federal government’s pandemic moratorium on student-loan payments past September.

Read more: Canceled Student Loans May Be Boon For Bonds

Apart from the expiration of the CARES Act, there is the separate but related longer-term looming issue of whether the Biden administration will unilaterally cancel a large portion of student loan debt altogether. Members of Congress would like President Biden to enact some level of forgiveness by executive order, but he has conveyed that he’d rather do it through congressional legislation.

The U.S. student loan forgiveness that progressives in Congress are calling for may not be a bad thing for investors in bonds backed by that debt, because owners of those securities are getting paid high enough yields to compensate for any early principal payments that may result, Cantor Fitzgerald analysts said in March.

“Basically all securitization sectors have spreads at their 12-month or even multi-year lows,” said the Methodical Valuation and Advisory analysts. “Could spreads get even tighter from here? Sure, why not? Especially for more esoteric assets that trade on the periphery. Even after rates rose rapidly into the close of Q1, which has since partially subsided, we are still in a relatively low-rate environment and any meaninful yield pick-up that securitizations offer over other sectors will keep on attracting the usual suspects and the occasional new entrant.”