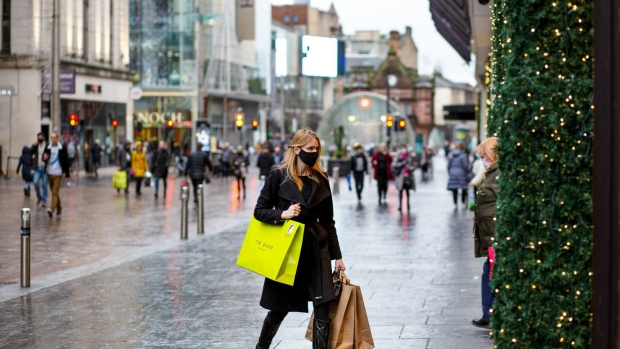 Shoppers on the high street in Glasgow, U.K., on Friday, Nov. 20, 2020. Support in Scotland for breaking away from the rest of the U.K. climbed to a record as the coronavirus pandemic and economic fallout harden political divisions in the country. Photographer: Emily Macinnes/Bloomberg , Bloomberg

(Bloomberg) -- Prime Minister Boris Johnson will confirm the end of the national lockdown in England on Dec. 2 and reintroduction of the tier system when he announces the U.K.’s Covid winter plan in Parliament on Monday.

The plan is set to be discussed and signed off by his Cabinet on Sunday, according to an emailed statement from the prime minister’s press office. It will include guidelines for family visits over Christmas, “despite ministers being clear this will not be a normal festive period.”

More areas will be placed into the higher tiers in order to keep the virus under control, and ensure further national restrictions aren’t required. The government’s advisory group, known as SAGE, is also likely to publish further evidence on Monday, setting out the scientific advice that the previous tiers weren’t strong enough, and that a tougher regional approach is required.

The rate of growth in infections in the U.K. is slowing, according to latest data. Still, more than 2,800 people have died in the past week and total cases are approaching 1.5 million after surging 50% this month.

Johnson and his scientific advisers “are clear the virus is still present - and without regional restrictions it could quickly run out of control again before vaccines and mass testing have had an effect.”

Ministers will announce on Thursday which areas will be under which tiers, and Parliament will vote on the system before it becomes enforceable. There will be a legal obligation to keep measures under ongoing review.