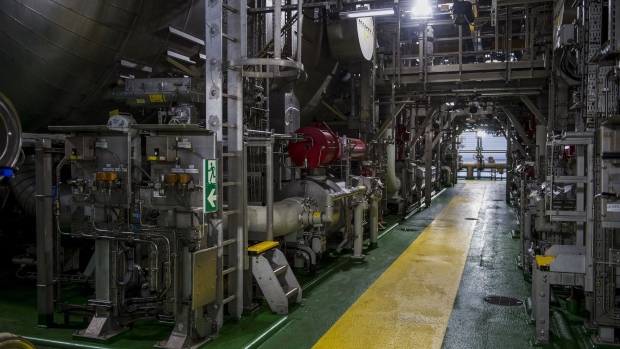 A yellow pathway marks the walking route on one of the four connected platforms on the Johan Sverdrup oil field off the coast of Norway in the North Sea. Photographer: Carina Johansen/Bloomberg , Bloomberg

(Bloomberg) -- Equinor ASA will keep pumping as much natural gas as it can through spring and summer, allowing for maintenance shutdowns, to help refill depleted European storage, said Chief Executive Officer Anders Opedal.

Norway, Europe’s second-largest gas supplier, is already pumping flat out after a blistering surge in prices. With spring approaching, the market’s focus now shifting to whether there’ll be enough of the fuel available during the coming months to replenish inventories and reduce the risk of another market crisis next winter.

“We are planning to continue at max,” Opedal said in an interview on Tuesday, when asked what Equinor could do to help Europe refill its gas storage. At the same time “we have a maintenance program that we need to follow.”

North Sea producers typically conduct essential maintenance work, which can involve shutting down some output, in the summer months when the waters are calmer and demand is lower, particularly for natural gas. Much of the fuel that is produced at this time is usually placed into seasonal storage for later use. Last year, scarce supplies meant that process wasn’t completed, sowing the seeds for record prices when temperatures dropped.

Europe is keen to avoid making the same mistake this year. Germany is planning to force energy firms to keep enough gas in storage to ensure security of supply in the winter, according to people familiar with the matter.

“We have always been a reliable supplier of gas to Europe,” said Opedal. “We will continue to be, and make sure that the demand coming from Europe is filled from us as much as we can.”