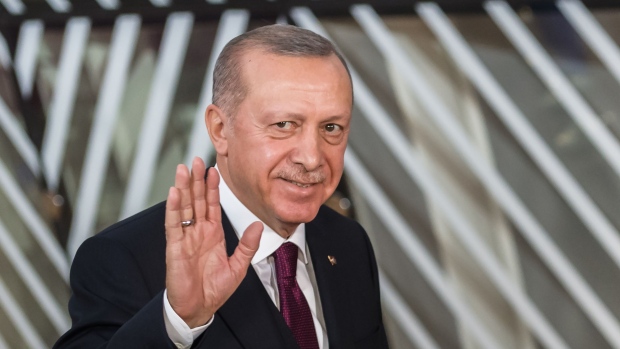 Recep Tayyip Erdogan, Turkey's president, gestures as he arrives ahead of talks in Brussels, Belgium, on Monday, March 9, 2020. Ahead of high-level meetings in Brussels Monday, Erdogan urged Greece to open its borders to refugees, a call likely to further stir tensions with the EU as it grapples with the damage unleashed by the spread of the deadly and unpredictable coronavirus. , Bloomberg

(Bloomberg) -- When President Recep Tayyip Erdogan reopens Istanbul’s Hagia Sophia for prayers next week, it will be the crowning symbol of his mission to reassert Turkey’s role as a Muslim power on the global stage. Yet Turkey’s rarely seemed more alone.

From conflicts in Syria and Libya to strikes in Iraq, NATO’s second-largest army is at work day and night with armed drones, warplanes and tanks. Turkish ships sail the Mediterranean, quarreling over gas resources with European Union members Greece and Cyprus.

After nearly two decades at the helm of a nation that straddles the Middle East and Europe, Erdogan has arguably built Turkey into a regional power with more international clout than at any time since its founding as a secular Westward-facing state by Mustafa Kemal Ataturk in 1923.

Erdogan’s assertive bid to expand his influence in a region previously under Ottoman rule for hundreds of years means Turkey is now beset by conflict, opposed by heavyweight Arab governments and in discord with its traditional allies. For now, however, no one seems willing or able to stop him.

“Turkey has the strategic advantage,” Timothy Ash, Senior Emerging Markets Sovereign Strategist at Bluebay Asset Management, said. “The reality is that the EU is a lion with no teeth when it comes to Turkey. And Erdogan has long figured this out.”

The U.S. has condemned some aspects of Erdogan’s foreign policy but shied away from concrete action against a key NATO ally. For the EU, Turkey’s role as a buffer against the flow of migrants and militants into Europe has made it too risky to wield trade sanctions over its gas exploration in the east Mediterranean. In any case, trade sanctions would hurt European countries too and few are willing bear those costs as the coronavirus pandemic rips through the global economy.

An applicant to the EU and long-time American ally, Turkey’s pursued an increasingly independent foreign policy in recent years and, so far, it’s worked. Turkey defied the U.S. and NATO with its purchase of the S-400 air-defense system from Cold War enemy Russia, yet has won President Donald Trump’s assent to send troops into messy conflicts the U.S. would rather avoid.

In Libya, a Turkish intervention blessed by the U.S. turned the tide in a complicated proxy-war, defeating the Russian-backed forces of renegade general Khalifa Haftar and saving a government endorsed by the United Nations. At the same time, that victory brought Turkey closer to a potential confrontation with Egypt and the UAE, American allies who support Haftar.

In Syria, Turkey has worked with Moscow to avert a Syrian government assault on the last rebel bastion that could trigger a new refugee crisis. But its offensive last year against U.S.-backed Syrian Kurds, who fought on the front lines of the war against Islamic State, caused anger in Europe and the U.S. Congress, though it was endorsed by Trump.

Talk of sanctions over the S-400s and the Syrian incursions persists in Congress, where deep-seated support and sympathy for Turkey has gradually been eroded. Those decaying relations culminated last year in a symbolically-significant vote to recognize the 1915 massacre of Armenians as genocide, over Turkey and Trump’s objections. The country’s so far escaped serious punishment, however, as Erdogan walks a fine line between defying his friends and ensuring Turkey remains useful.

“Turkey’s ties with the U.S. are very good at the leadership level but very poor at the institutional level,” said Fadi Hakura, who manages the Turkey Program at London’s Chatham House think-tank. “Erdogan’s gambling on Trump, and it’s worked so far, but you can’t run a foreign policy like that as the odds can turn against you. Everything could change if Joe Biden wins the U.S. election in November.”

Across an Arab region convulsed by upheaval, Erdogan’s friends are few while his list of detractors is a who’s who of Arab heavyweights ranging from Egypt to Saudi Arabia to the United Arab Emirates.

They accuse Turkey of seeking to undermine political stability and meddle in Arab affairs by backing Islamist opposition groups such as the Muslim Brotherhood, which is banned or repressed by many governments. Unless Erdogan engages in some serious diplomacy and significant policy shifts, it’s hard to see them allowing Ankara to establish itself as the main power in Libya.

“Erdogan has won a series of tactical victories but he has been either unwilling or unable to turn them into strategic gains as this requires muscular diplomacy not just military interventions,” said Hakura.

For Europe, Turkey is at once an indispensable partner and a problem. Its vow to begin gas exploration off the divided island of Cyprus was denounced by Mediterranean neighbors Egypt, Israel and Greece, potential partners in a pipeline project, as well as the EU. Whether any companies would bid given the territorial disputes is unclear, but the message was not; Turkey’s lengthy east Mediterranean coastline earns it a seat at the table. Home to 3.6 million Syrian refugees, Turkey also controls a major migration tap to the West, forcing European officials to tread lightly.

In a call for closer European-Turkish cooperation published in Politico ahead of an EU foreign policy meeting on Monday, Foreign Minister Mevlut Cavusoglu cited Libya and Syria as places where Turkey was taking military action that safeguards Europe, yet facing criticism from France and others, while its interests in the Mediterranean were overlooked in “an emerging streak of abuse and estrangement.”

On a recent visit to Germany, Cavasoglu’s call for a resumption in tourism was rebuffed. Germany cited health concerns. He saw a political motivation.

The EU, for its part, predictably condemned Turkey’s decision last week to convert the Hagia Sophia back into a mosque and threatened to expand a European blacklist that has so far targeted two Turks over Ankara’s gas exploration bid. Like NATO, however, it’s also signaled a desire to de-escalate tensions with a country that remains critical to Europe’s security.

“Erdogan’s aspiring to claim the leadership of Sunni Muslims and reverse the loss of regional influence once enjoyed by the Ottoman Empire,” Nihat Ali Ozcan, a strategist at the Economic Policy Research Foundation in Ankara, said. He’s “winning support from some nationalists and pious grass roots at home as well as some corners of the Middle East but increasing the risk that a coalition of Western countries will be formed in addition to those in the Arab world annoyed by Turkey’s increasingly assertive foreign policy.”