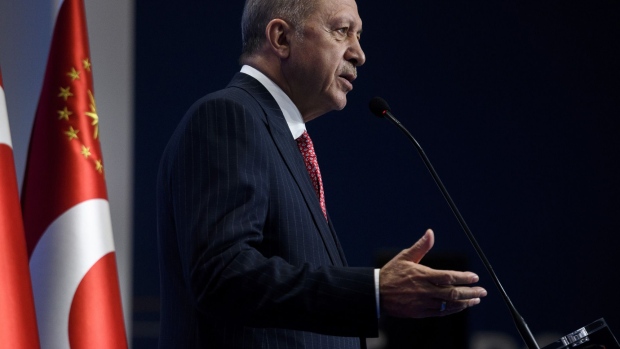 ROME, ITALY - OCTOBER 31: Turkish president Recep Tayyip Erdogan attends a press conference at the end of the Rome G20 Summit, on October 31, 2021 in Rome, Italy. The G20 (or Group of Twenty) is an intergovernmental forum comprising 19 countries plus the European Union. It was founded in 1999 in response to several world economic crises. Italy currently holds the Presidency of the G20 and this year's summit will focus on three broad, interconnected pillars of action: People, Planet, Prosperity. (Photo by Antonio Masiello/Getty Images) , Photographer: Antonio Masiello/Getty Images Europe

(Bloomberg) -- Turkey’s President Recep Tayyip Erdogan reiterated his call for the central bank to maintain its series of interest-rate cuts, arguing the strategy will eventually bring inflation under control.

Erdogan spoke to Turkish journalists during a visit to Qatar on Tuesday as the central bank, which has slashed borrowing costs by 400 basis points to 15% since September, prepares for the last rate-setting meeting of the year on Dec. 16.

Facing falling support in opinion polls ahead of 2023 elections, Erdogan has embarked on a full-throttle push to expand the economy and create jobs by demanding the central bank reduce borrowing costs. His strategy has battered the currency, which lost more than 45% of its value to the dollar so far this year.

“We certainly don’t believe in high interest rates. We will pull down inflation and exchange rates with low-rate policy,” said Erdogan. “High rates make the rich richer, the poor poorer. We won’t let that happen.”

Erdogan said his government aims to support investments through low rates which he said will lead to higher production, exports and jobs. “Growth will follow,” he said.

The president signaled potential swap deals between the Turkish central bank and “many other central banks.”

Erdogan also dismissed criticism from opposition parties that the central bank’s reserves had been depleted in supporting the lira.

“Turkey doesn’t have a serious FX reserve issue and we will continue to build FX reserves,” Erdogan said.