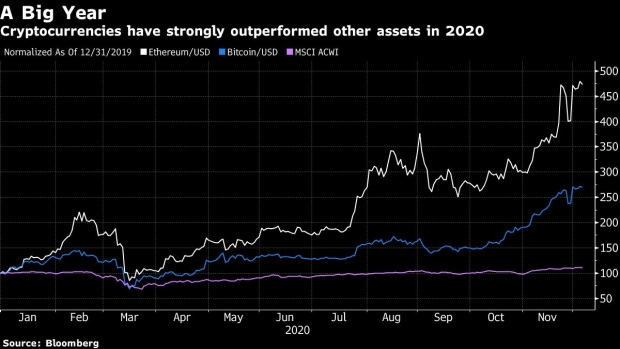 (Bloomberg) -- While Bitcoin’s record-high grabs attention, its crypto compatriot Ethereum is continuing to broaden its appeal beyond the software programming crowd.

Before this year, most investors’ first stop was Bitcoin, according to Michael Sonnenshein, managing director at Grayscale Investments LLC, which has investment products that track both and allows investments from institutional and accredited investors only. But the Ethereum blockchain, the most actively used in the world, and its Ether token are getting more attention, he said.

“Over the course of 2020 we are seeing a new group of investors who are Ethereum first and in some cases Ethereum only,” Sonnenshein said in a phone interview. “There’s a growing conviction around Ethereum as an asset class.”

DeFi, of course, has been the hottest thing in crypto this past year, Ethereum also got users to pledge enough digital currency to enable a system upgrade. And Ethereum “appears to be maintaining platform leadership status,” according to Bloomberg Intelligence strategist Mike McGlone.

While Bitcoin’s approximately 170% year-to-date gain would look good by just about any measure, Ether is up about 360% amid a boom in decentralized finance, or DeFi, which often uses its blockchain to power in what many instances have been described as blatant money grabs similar to those seen during the crypto bubble of 2017.

Read the QuickTake: Why ‘DeFi’ Utopia Would Be Finance Without Financiers

The Grayscale Ethereum Trust, which tracks Ether’s price, has 29.6 million shares outstanding compared with 5.2 million at the end of 2019, according to data compiled by Bloomberg. Inflows went from $20.1 million in the fourth quarter of 2019 to $204.1 million in the third quarter of 2020. And in the third quarter, over 17% of inflows into the Grayscale Ethereum Trust came from new institutional investors, according to a report from the company.

That doesn’t mean it’s smooth sailing. Cryptocurrencies remain volatile -- Ethereum is currently trading around $600, well off its February 2018 closing high of $937. While in the past two weeks, it’s has three 10%-plus moves, the token continues to amass interest. And the Grayscale Ethereum Trust has encountered issues as the price got disconnected from the net asset value.

“The development of the asset class has continued to solidify itself,” Sonnenshein said. “Ethereum has along the same lines of the staying power Bitcoin has.”