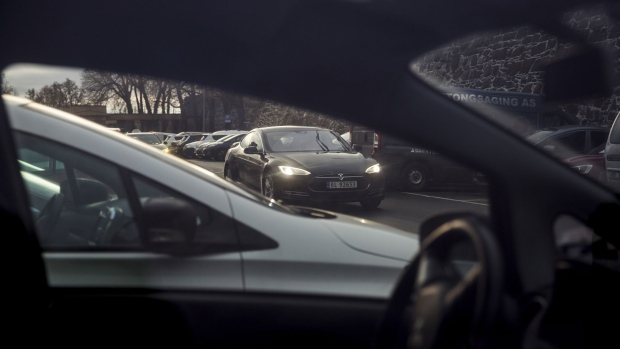 A Tesla Motors Inc. Model S electric vehicle (EV) drives in Oslo, Norway, on Monday, Nov. 21, 2016. The International Energy Agency forecasts that global gasoline consumption has all but peaked as more efficient cars and the advent of electric vehicles from new players such as Tesla Motors Inc. halt demand growth in the next 25 years. Photographer: Fredrik Bjerknes/Bloomberg , Bloomberg

(Bloomberg) -- The European Commission seeks to have at least 30 million electric vehicles on the region’s roads by the end of the decade under a plan that would require the auto industry to massively accelerate its transformation.

The target for zero-emission cars is included in a draft strategy document obtained by Bloomberg News that is scheduled to be published next week. The goal is ambitious considering some 1.4 million EVs are being driven in Europe now, according to BloombergNEF. The researcher is forecasting there will be 28 million plug-in hybrid and battery-electric vehicles on the road by 2028.

The plan maps out targets for the broader transport sector, calling for high-speed rail traffic to double by 2030 and for scheduled travel between cities of under 300 kilometers (186 miles) to become carbon-neutral. Zero-emission large aircraft and vessels should be “ready for market” by 2035, it says.

Looking further ahead, the goals include doubling rail-freight traffic and tripling high-speed train traffic by the middle of the century. The road map is expected to lead to draft legislation in the coming months.

The proposals for the transport industry come amid a brewing spat between European Union members over a plan to toughen its 2030 emissions-reduction target to at least 55% by the end of the next decade from 1990 levels. Raising that goal from the existing 40% is a key element of the European Green Deal and would require more spending on energy production and infrastructure.

“We need to make all modes of transport sustainable” to meet climate goals and enable European companies to remain industrial leaders, the draft document states, noting that zero- and low-emission vehicles still represent a too-small part of the vehicle fleet.

The Commission will revise the CO2 standards for cars and vans by June 2021, and for heavy duty vehicles in 2022, it said, calling for a policy “to stimulate demand for zero-emission vehicles.”

European planemaker Airbus SE has unveiled three possible designs for hydrogen-powered aircraft as it races to bring a zero-carbon passenger plane into service by 2035. The company is under pressure from the French and German governments, its biggest shareholders, to speed development of new aircraft.