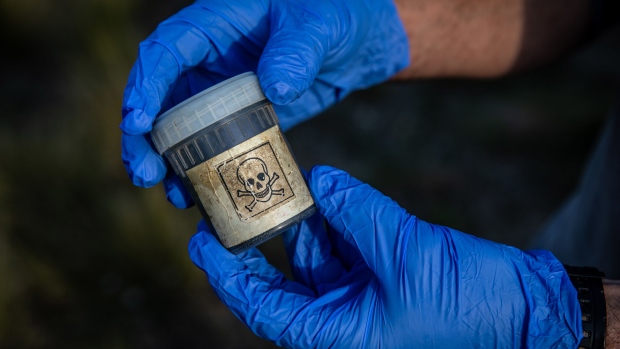 A container of Aldicarb pesticide, now banned in Europe, in Tremp village in the Aran Valley, Spain, on Monday, April 19, 2021. The inquiry into the death of a bear named Cachou is the first criminal investigation into the death of a wild animal in Spain, and possibly anywhere else in Europe, environmental groups say. Photographer: Angel Garcia/Bloomberg , Bloomberg

(Bloomberg) -- The European Union is sticking with a plan to halve the use of the pesticides by 2030 even as agriculture comes under pressure from shortages sparked by Russia’s tactics in its war against Ukraine.

The European Commission will propose to use legally binding targets to reach its plan, which stops short of an overall ban on pesticides and focuses instead on organic products and other alternatives, according to EU officials. The plan would prohibit using pesticides in public spaces and around facilities like schools and hospitals.

“We will replace chemical pesticides with safe alternatives,” Health Commissioner Stella Kyriakides said. “Farmers will be fully supported with unprecedented EU funding possibilities to cover the cost of the transition.”

The EU’s executive arm is set of unveil the measure Wednesday in the first legislation to come out of its sustainable food plan aimed at reducing agriculture’s environmental impact.

Governments are grappling with food prices near a record high as Russia’s invasion of Ukraine has disrupted trade, fueling hunger and worsening a cost-of-living crisis. The EU had delayed the pesticides directive, which was due in the first quarter. It will have to be approved by the European Parliament and member states before it comes into effect and could still be changed or weakened during the debate.

Pests and diseases reduce crop yields by 20% to 40% globally, according to CABI, a UK-based nonprofit that researches agriculture. But as insects become more resistant to pesticides, farmers use more chemicals, raising concerns about the impact on wildlife and human health.

The US Environmental Protection Agency recently said that some commonly used insecticides are likely harmful to thousands of endangered animals and plants, while Bayer AG’s weedkiller Roundup is the subject of tens of thousands of lawsuits alleging it causes cancer, which the company denies.

Requirements to reduce fertilizer and pesticide use could cut EU wheat yields by about 15% by 2030, and flip the bloc into a net grain importer, Philippe Mitko, the president of Coceral, an association representing the agriculture trade, said last year.

EU officials said the changes are ambitious, but they will be gradual and feasible. The bloc will provide guidance, training and support, but it will be up to the member states to set their national targets and implement them.

The plan won’t put the continent’s food production at risk, the officials insisted, noting there is no alternative to acting since the decline of pollinators caused by pesticides is a serious threat to food supplies in the longer term.