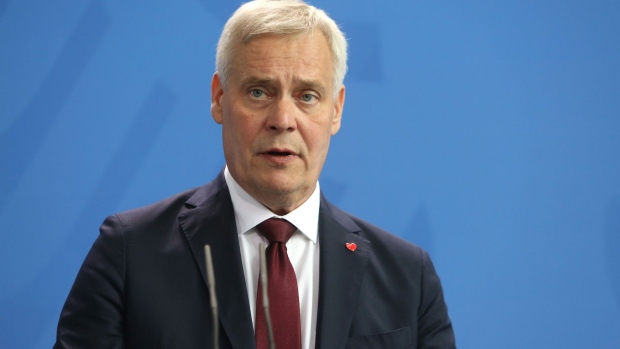 (Bloomberg) -- The European Union Presidency said it’s unlikely to strike a deal with the U.K. this week, dimming U.K. Prime Minister Boris Johnson’s hopes of avoiding another delay to Brexit.

Antti Rinne, premier of Finland -- which currently has the rotating presidency of the EU -- said the two sides need more time to reach an agreement before leaders meet in Brussels for a summit Thursday.

“If there is a possibility to negotiate after the Council meeting, it would be so,” Rinne told reporters in Helsinki.

Johnson repeatedly pledged to “get Brexit done” by Oct 31., as he spoke in Parliament on Monday following a Queen’s Speech that laid the ground for a general election. He’s refused to ask for a delay to Brexit, even though the Benn Act says he must do so if he hasn’t finalized a deal with both the EU and U.K. Parliament by Oct. 19.

The EU plans to decide Wednesday whether there will be a deal for leaders to sign during the Oct. 17-18 summit and has ruled out negotiating during the actual meeting of leaders.

With the clock ticking down, Johnson’s Brexit opponents in the U.K. met Monday to discuss their next move. They concluded any deal Johnson brings back from Brussels would probably be incomplete, meaning he’d likely have to delay Brexit anyway, according to two people familiar with the discussions.

The group, which consists of some Labour MPs, the Liberal Democrats, Wales’ Plaid Cymru, the Scottish National Party and Greens — alongside some former Conservatives — said they’d wait and see how the next 48 hours pans out.

If Johnson gets a deal they would then decide whether to seek a confirmatory public vote on it as a price for allowing it to pass Parliament, the people said.

But Johnson once again ruled out another referendum on Brexit on Monday.

“If there could be one thing more divisive more toxic than the first referendum, it would be a second referendum,” he said.

To contact the editors responsible for this story: Tim Ross at tross54@bloomberg.net, Robert Jameson