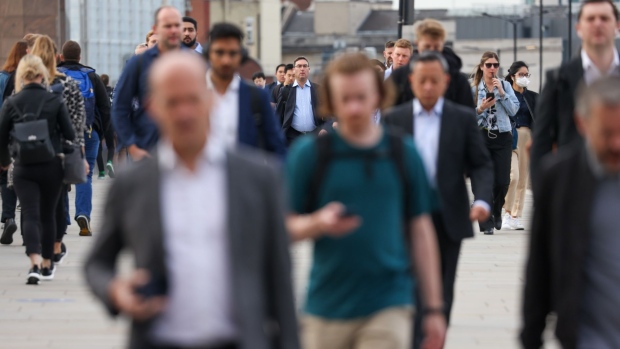 Morning commuters cross London Bridge towards the City of London, U.K., on Monday, Sept. 13, 2021. The ending of the government's furlough scheme in September will be key to the outlook for jobs and interest rates. Photographer: Hollie Adams/Bloomberg , Bloomberg

(Bloomberg) -- The European Union is expected to meet strong investor demand when it returns to the bond market on Tuesday with a seven-year bond sale.

The sale is the next stage of the bloc’s NextGenerationEU stimulus, and the bloc will also start selling short-dated bills for the first time on Wednesday. Analysts say they’re expecting a rush of orders from investors because the bonds are relatively scarce and the central bank is able to buy up to 50% of the EU’s issuance, providing a guaranteed backstop.

The seven-year issuance, which will be done by syndication, is “special” and will likely outperform, said Jaime Costero, a rates strategist at Santander. With allocations to foreign central banks in this area of the curve of at 31%, “this constitutes a large pool of relatively captive demand, to be topped by the ECB’s QE purchases in the secondary market,” he said.

The offering is part of a program aiming to raise about $1 trillion of debt over five years to finance grants and loans to member states. Almost a third of the roughly 800 billion euros will be in green bonds, which the bloc will start to sell in October.

The funding plan is unchanged for the rest of the year, making up about 80 billion euros of long-term bonds for 2021, according to EU Budget Commissioner Johannes Hahn. Under its issuance calendar, the Commission will be holding one auction and one syndication per month for its bonds.

Since EU member states have requested only 492 billion euros in grants and loans so far, the full 800 billion euros may not be used by 2026, Danske Bank analysts wrote in a note.

Some analysts raised the possibility that there could be a drop off in investor orders compared with previous NGEU sales.

“As the EU comes more regularly to the market, there is less of an incentive to overstate one’s orders,” said Antoine Bouvet, senior rates strategist at ING, who expects the bloc to sell about 10 billion euros of the bonds. “The novelty has worn off now they’re a regular issuer.”