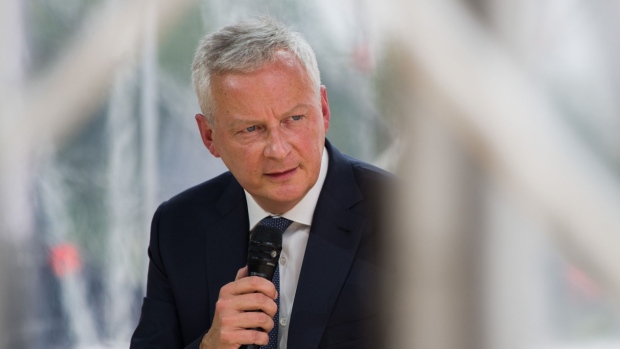 (Bloomberg) -- The best way for Europe to counter a US climate law that it fears will harm businesses and lure investment across the Atlantic is to do the same, French Finance Minister Bruno Le Maire said on Monday.

The bloc should look at all available tools to boost its industry, he said. This includes combining national funding plans, speeding up and simplifying a support program known as Important Projects of Common European Interest, and using money held by the European Investment Bank.

“Let’s gather the financial means so that we could have a very strong Europe able to provide the same amount of money” as “the one the US are putting on the table,” Le Maire said in Brussels ahead of a meeting of the Eurogroup, which brings together the euro area’s finance ministers.

The “best response” to the US Inflation Reduction Act is a European one, namely “Europe’s capacity to equip itself with the same simple, massive, efficient means to reindustrialize the continent and achieve the decarbonization of the European economy,” he added.

Despite its title, the legislation, which came into force in August, has become a point of contention in Europe, with complaints the US will attract investment away from the bloc with billions of dollars in incentives for renewable energy companies. It includes at least $374 billion in climate and clean energy measures over the next decade, with incentives to support new domestic solar, battery and electric-vehicle factories.

French President Emmanuel Macron, who has branded the law “not friendly,” raised the EU’s concerns with Joe Biden in Washington last week during a state visit. He later said the two leaders had agreed to fix the dispute after his US counterpart said he “makes no apology” for the decision.

European Commission President Ursula von der Leyen said this weekend that the EU should respond by improving state aid rules to enable public investment, re-assessing the need for further funding of the shift to green technologies, and working with the US to address the most worrying aspects of the law.

The US measures are an invitation for Europe to get its own house in order, according to German Finance Minister Christian Lindner, who was also attending the Eurogroup meeting.

The EU must be more agile, and there is “room for improvement” on state aid, he said, adding that some parts of von der Leyen’s initiative needed further debate, especially a proposal for a European sovereignty fund.

“If that means a kind of rebranding of existing tools, I’m open to discussion,” Lindner said. “If sovereignty funds means new common European debt then I think this would not be an improvement of our competitiveness or stability, it would be a threat.”

The EU’s competition chief, Margrethe Vestager, said last week that it was an absolute priority to avoid a subsidy race and warned against the risk of unleashing a trans-Atlantic trade war.

Dutch Finance Minister Sigrid Kaag echoed her comments in Brussels on Monday, saying Europe should continue to have a “good conversation with the US because they are in the end our ally.”

--With assistance from Cagan Koc and John Follain.