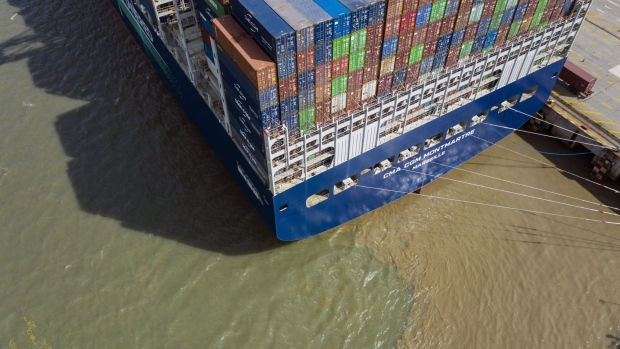 A container ship at the Yangshan Deepwater Port in Shanghai, China, on Tuesday, July 5, 2022. Senior US and Chinese officials discussed US economic sanctions and tariffs Tuesday amid reports the Biden administration is close to rolling back some of the trade levies imposed by former President Donald Trump. Photographer: Qilai Shen/Bloomberg , Bloomberg

(Bloomberg) -- The European Union will proceed with two cases against China at the World Trade Organization on Wednesday after talks to resolve the issues with its largest trading partner failed to yield results.

The cases relate to China’s restrictions on Lithuanian exports and Beijing’s coercive practices to limit patent holders from exercising their rights to protect their innovations before a court, said Valdis Dombroskis, the European Commission vice-president responsible for trade. Both cases were of “systemic importance,” he said.

“Our first preference was to find negotiated solutions through consultations and we invested a lot of time in those exchanges to avoid further steps,” the EU trade chief told Bloomberg News in an interview Tuesday. “But these exchanges did not bring us the satisfactory results.”

The escalation in the trade dispute with China comes as the EU bloc is reassessing its relationship with the country, increasingly seen as a competitor and a rival on issues ranging from market openness to human rights. But the EU has been also trying to re-engage politically with Beijing and wanted the Chinese government to play a more active role as a mediator with Russia following Moscow’s invasion of Ukraine.

The bilateral relationship has worsened since last December after China imposed coercive measures against exports from Lithuania and other EU products that include Lithuanian components after Taiwan opened a trade office in the Baltic country. Companies from Sweden and Germany were also affected, people familiar with the matter said.

As a result, Lithuanian exports to China fell by 80% from January to October compared with the same period of the previous year. The WTO is expected to establish a panel to settle the dispute in early 2023, and verdict could take up to 1 1/2 years.

China banned Lithuanian exports by either blocking customs clearance or imposing phytosanitary requirements on certain products including beef and some alcoholic drinks. Countries including Australia and Canada have been also hit by China’s coercive practices.

The case “is not only about Lithuania, because it affects supply chains within the EU, and we see this kind of pattern of China restricting its trade flows with one or another country in response to different developments,” Dombrovskis said. “We see this is a recurring pattern.”

“We know that China is a difficult partner and also our companies are having different challenges while doing business there,” he added. Dombrovskis considered the EU decision as a test case for the WTO, given that China was “not transparent” about these type of measures as many of the restrictions are not formalized in written form, although the impact of the measures are “very visible.”

In addition, the EU will become the first jurisdiction to request a WTO verdict over China’s actions to impede companies from protecting their high-tech patent rights.

Chinese courts have been issuing so-called “anti-suit injunctions” since August 2020 to discourage companies from filing a case beyond its borders to settle a dispute under the threat of fines of up to €130,000 ($136,000) per day.

“We see this practice as damaging to innovation growth in Europe and is depriving European high-tech companies of exercising and enforcing their patent rights, which gives them a technological edge,” he said.

The bloc considers these anti-suit injunctions as part of China’s effort to position itself higher up in the technological chain to be capable of selling products at cheaper prices. In addition, it limits European companies’ powers to protect key standard-setting patterns.

The economic impact is significant. Only in the wireless communication field, European companies hold 3G, 4G and 5G licenses worth billions of euros, and these are now at risk because of these Chinese court decisions, Dombrovskis said.

The EU’s trade move against China comes as the bloc is in the final stages of setting up an anti-coercion instrument to increase its arsenal to retaliate in cases like these.

“Within the existing legal framework, we see the WTO panel as the most efficient way forward,” Dombrovskis said. The possibility of activating the anti-coercion instrument in parallel once it is in place is “something to be reflected,” he said.

(Updates with Dombroskis quote in second paragraph. A previous version of this story corrected the dates in first and third paragraphs.)