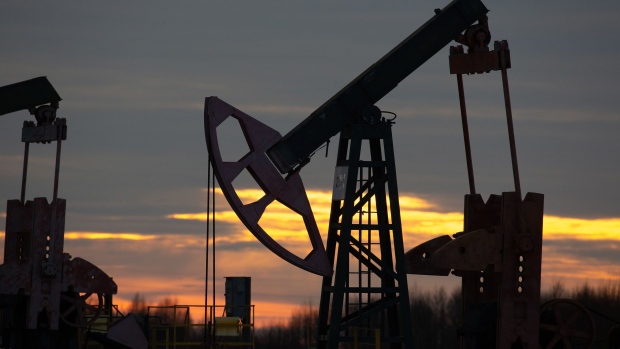 An oil pumping jack, also known as a "nodding donkey", in an oilfield near Neftekamsk, in the Republic of Bashkortostan, Russia, on Thursday, Nov. 19, 2020. The flaring coronavirus outbreak will be a key issue for OPEC+ when it meets at the end of the month to decide on whether to delay a planned easing of cuts early next year. Photographer: Andrey Rudakov/Bloomberg , Bloomberg

(Bloomberg) -- European Union countries reached a compromise on a new package of Russia sanctions that includes support for a price cap on oil sales to third countries, with a formal agreement expected on Wednesday, according to people familiar with the matter.

EU ambassadors on Tuesday night discussed ways to mitigate the impact the new package would have on countries with large shipping industries, said the people, who asked not to be identified because the talks were private.

Greece, Cyprus and Malta expressed concerns about curbs on transporting Russian oil and have been pushing for assurances on the effectiveness of the new mechanism and its potential impact, according to the people.

Josep Borrell, the EU’s foreign policy chief, told European lawmakers in Strasbourg on Wednesday that he expects an agreement to be reached later in the day on “sectoral and targeted personal sanctions.”

“This should further constrain Russia’s export capacity and the relations its industry continues to carry out particularly in the technological sector,” Borrell said.

The sanctions would add a ban on shipping Russian oil to existing restrictions on services needed to transport it, but carve out an exemption for oil priced at or under a level set by a coalition of the Group of Seven and other countries, according to a draft of the proposal seen by Bloomberg. The compromise reached on Tuesday would make entry into force of the sanctions conditional on adoption of the measures by the G-7.

The sanctions package will be formally adopted by the bloc on Wednesday barring any last-minute objections by national governments.

The broader sanctions package would target a range of individuals and entities, including senior Russian ministry officials and people involved in staging the recent, widely condemned referendums. It would also restrict access to aviation items, electronic components and specific chemical substances to deprive Russia’s military from important technologies.

Some nations were upset that the latest draft of the sanctions appears to have weakened several of the proposed measures, including the removal of a Russian diamond mining company from the penalty list.

To allow for an oil price cap, the bloc will have to change its current legislation. In June, EU nations agreed to a full ban on insurance and financial services for seaborne oil, while shipping was spared from the restrictions. Most of those prohibitions are due to kick in Dec. 5 alongside a ban on EU purchases of Russian crude.

The G-7, which endorsed a cap earlier this month, has said it wants an agreement in place before that date.