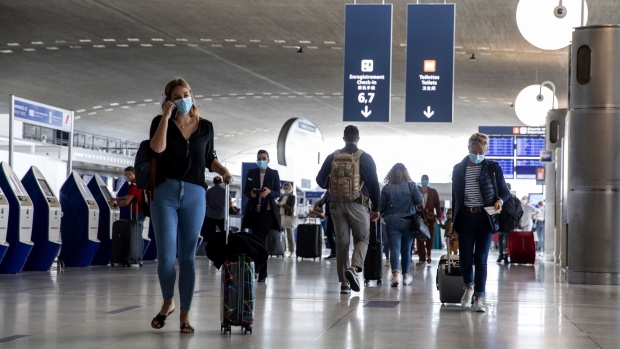 (Bloomberg) -- European Union leaders inched toward establishing bloc-wide vaccine certificates to enable countries to reopen to travel as Commission President Ursula von der Leyen warned that unless they hurry Apple Inc. and Google will step into the vacuum.

During a five-hour video call, the EU’s 27 leaders focused on how to haul their nations back to a form of normalcy after a pandemic that’s claimed more than 500,000 lives and shut down large parts of their economies. While there was broad support for certificates of some sort, leaders didn’t agree on the type of privileges they would grant.

”We have all agreed that we need vaccine certificates,” German Chancellor Angela Merkel told reporters after the talks. “In the future, it will certainly be good to have such a certificate but that will not mean that only those who have such a passport will be able to travel; about that, no political decisions have been made yet.”

Europe’s leaders have been anxious to find a response after facing criticism for a vaccination program that lagged behind the U.S. and U.K. There’s also the prospect of a third wave of infections leading again to stricter lockdowns.

It was the first such meeting as prime minister of Italy for Mario Draghi, the former European Central Bank president. He asked leaders to adopt a more resolute and pragmatic approach to speed up vaccinations and told them the program has to move much faster, according to an official with knowledge of the call.

Draghi also called for a tougher approach against companies that don’t respect delivery commitments, suggesting that their exports from the EU could be blocked not only during the period they don’t respect accords, but also for a certain period afterward.

Read More: Merkel Is Leaving, But the EU Has a New Heavyweight in Draghi

The growing support for a digital certificate with common criteria such as vaccination, negative testing or immunity was helped by Merkel seeming to soften her stance on the matter, backing work on such a document, according to two people familiar with her remarks. But von der Leyen urged the group to move faster because U.S. tech companies are already discussing an alternative with the World Health Organization.

“It is important to have a European solution because otherwise others will go into this vacuum,” she said at a press briefing. “Google and Apple are already offering solutions to the WHO. And this is sensitive information so we want to be very clear here that we offer a European solution.”

Countries including Germany and Belgium have come under fire from the EU commission for closing frontiers with other European nations to keep the virus under control. While they said that non-essential travel should be restricted, their summit communique included no new commitments, merely reiterating that shutting borders should be proportionate and non-discriminatory.

The convergence on passports comes with the bloc’s tourism-dependent economies, which suffered the steepest contractions last year, determined to open their doors to those who have been inoculated. Other nations, however, have resisted such moves, citing a lack of convincing evidence that vaccination halts transmission as well as concerns over granting certain citizens special privileges and legal considerations.

French President Emmanuel Macron was more skeptical during the discussion, voicing concerns about unknowns like the duration of immunity, the infection risk of those who have been vaccinated as well as legal and ethical issues regarding the protection of personal data, two people familiar with his remarks said.

“We’ll have, in the end, a harmonious EU approach,” he told reporters. “It’s obvious because there is no other choice.”

The summit came after AstraZeneca Plc Chief Executive Officer Pascal Soriot spoke to the European Parliament and sought to deflect blame for a shortfall in Covid-19 vaccine deliveries to Europe.

Soriot said his company would deliver 40 million doses to the EU in the first quarter, with the volume set to rise in coming months. Employees are working around the clock to increase production, but perfecting the process takes time and isn’t without setbacks, he said.

During the leaders’ discussion, von der Leyen sought to reassure the group that any vaccine supply shortages will soon be over. According to a slide shown to EU leaders available doses in the following quarters will be sufficient to vaccinate the bulk of the bloc’s population by the end of September. Draghi wasn’t convinced, according to another official, saying deliveries in the second and third quarters couldn’t be predicted.

The government has asked health authorities to closely monitor the situation in the capital and other districts as it seeks to avoid a third nationwide lockdown, Castex said on Thursday. While France has seen an average of about 20,000 new cases a day since December, and intensive-care occupancy recently showed a slight gain to 67%, there’s an increasingly pronounced regional variation.

“A lockdown is a tool that we have to resort to when we can’t do anything else,” Castex told a weekly news conference in Paris. “We must do everything to put it off and allow the vaccines time to have an effect.”