Demand for fleets could cause Boeing and Airbus shares to surge: Peapack Private Wealth's Dietze

The U.S. and the European Union agreed to extend a tariff truce for five years, parking a dispute over aircraft subsidies given to Airbus SE and Boeing Co. that saw the allies impose duties on US$11.5 billion of each other’s exports.

U.S. Trade Representative Katherine Tai, speaking to reporters in Brussels on Tuesday, said the tariffs would remain suspended as long as the terms of the agreement are upheld and while they work on addressing issues including outstanding subsidies already paid.

The accord turns the page on a key conflict in former President Donald Trump’s trade war and sets the stage for a new era of transatlantic cooperation over state aid at a time when China is vying to displace the Boeing-Airbus civil aircraft duopoly.

“Today’s announcement resolves a long standing trade irritant in the U.S.-EU relationship,” Tai said. “We have also with the EU agreed to clear statements on acceptable support for large civil aircraft producers and a cooperative process to address that support between our two parties.”

The European Commission spent Monday night discussing the accord with member states to get the deal over the line before an EU-U.S. summit in Brussels with President Joe Biden, according to EU officials familiar with the deliberations. The allies will also vow to end a separate dispute over steel and aluminum, in a sign of progress in resetting the relationship.

Under the Airbus-Boeing deal, all future passenger aircraft will be required to be developed without subsidies, the officials said.

The agreement was driven, in part, by a growing awareness among policy makers in Brussels and Washington that China’s state-sponsored aerospace manufacturer Commercial Aircraft Corp. of China, or Comac, is on track to become a legitimate rival in global planemaking by the end of the decade.

“This really opens a new chapter in our relationship because we move from litigation to cooperation on aircraft,” European Commission President Ursula von der Leyen said in a statement. “Today we have delivered.”

Shares of Airbus, based in Toulouse, France, advanced 0.9 per cent as of 12:43 p.m. in Paris, bringing this year’s gain to 27 per cent. Chicago-based Boeing shares were up 0.7 per cent ahead of regular U.S. trading. They have risen 15 per cent year-to-date. 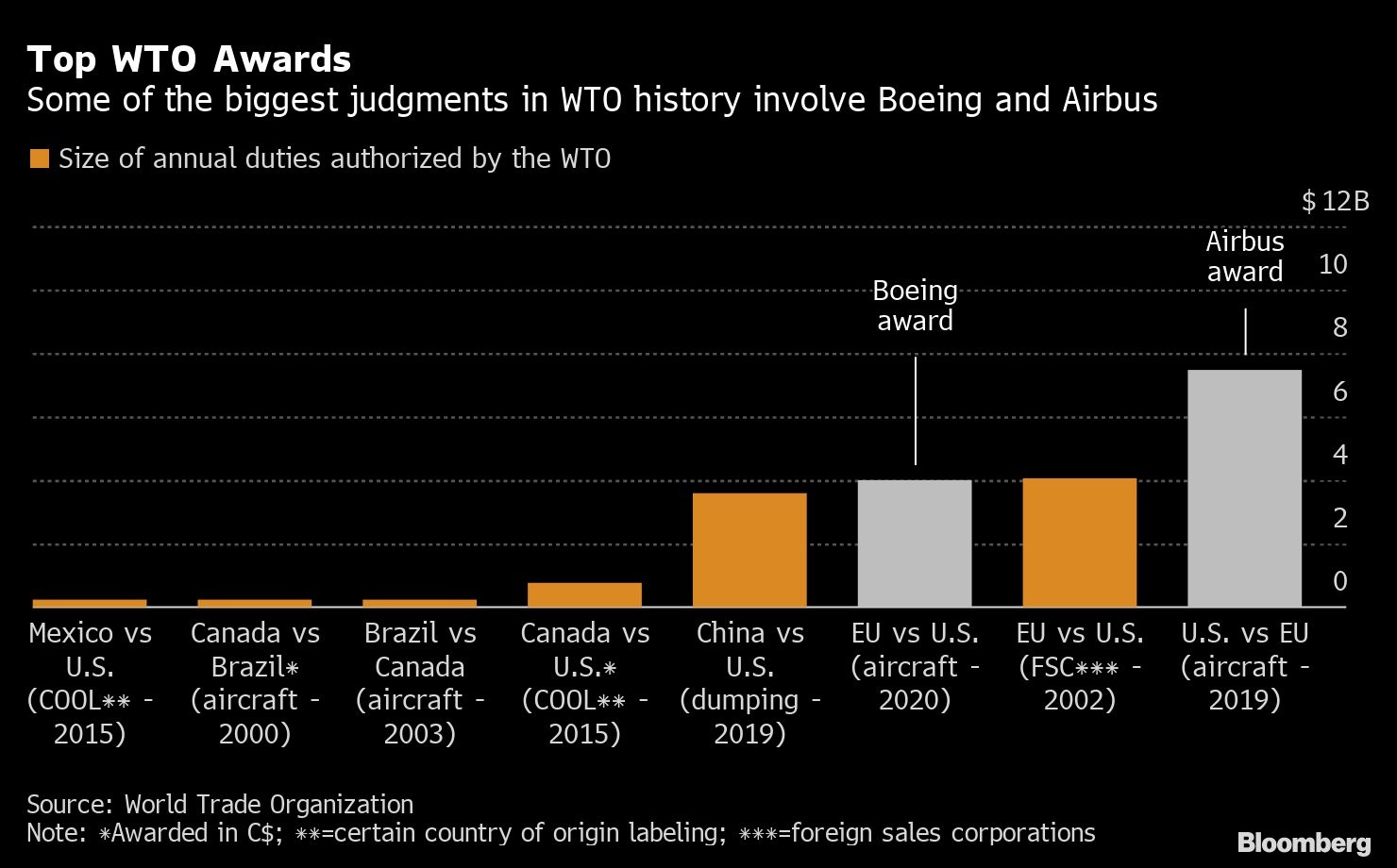 The feud dates back to 2004, when the U.S. lodged a legal case at the World Trade Organization against the EU over member-state support to Airbus for commercial aircraft development. A parallel case opened by the bloc argued that Boeing benefited from U.S. subsidies as well as space and military contracts, which defrayed the cost of civilian aircraft development.

In 2019, the World Trade Organization authorized the U.S. to level tariffs against US$7.5 billion of EU exports annually over government support for Airbus. The EU then won permission to hit back with levies on US$4 billion of U.S. goods.

While the dispute escalated during the Trump administration, the levies, which extend beyond aircraft parts to items like tractors, wine and cheese, were suspended by both sides in March as negotiators worked toward an agreement. The U.K. unilaterally suspended its tariffs with the U.S. in December as it broke from the EU.

Airbus has likely reimbursed or moved to commercial rates all launch-related financing that was deemed illegal, and any further adaptations required are likely to be immaterial, said Sandy Morris, an analyst with Jefferies in London.

“I understand why the U.S. might have felt aggrieved in the first place,” Morris said. But he said that it has long looked like there were mutual infractions, and “seeking to bolt the stable door long after the Airbus horse had left was futile.”

The EU and U.S. will also commit at the summit to remove tariffs related to a steel and aluminum dispute, according to a draft of the meeting’s conclusions. In 2018, the U.S. imposed levies on metals exports from Europe on national-security grounds.

This one is trickier and there has been back-and-forth over the exact language in the drafts of the joint communique, but both sides seem to agree on pushing for a deadline by the end of the year, said the officials, who asked not to be identified because the talks are private.

The EU retaliated against the U.S. steel and aluminum measures by targeting 2.8 billion euros (US$3.4 billion) of American imports with tariffs on a range of big-brand products, including Harley-Davidson Inc. motorcycles, Levi Strauss & Co. jeans and bourbon whiskey.