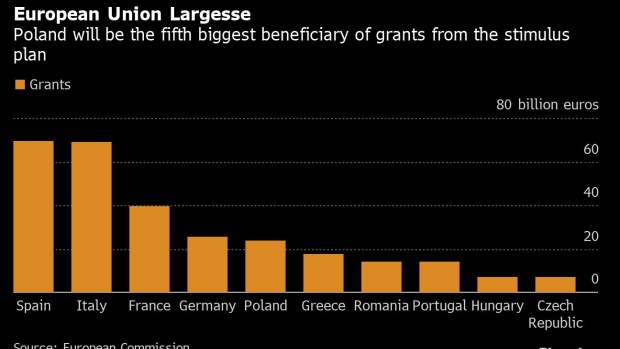 (Bloomberg) -- Poland ratified the European Union’s pandemic stimulus package, overcoming a rift in the government to help open the taps for hundreds of billions of euros to flow to all member states.

The approval banished worries that the bloc’s largest eastern nation could torpedo the 800 billion-euro ($961 billion) package after Poland teamed up with Hungary in December to protest efforts by Brussels to attach strings to the money based on adherence to democratic rule of law.

The vote also laid bare a dispute over the EU that threatened to break apart the three-party ruling alliance and potentially trigger early elections. Lawmakers from the opposition Left threw their support behind the government-leading Law & Justice Party and another junior partner to push the measure through on Tuesday.

The third coalition force, United Poland, voted against the package. Its leader, Zbigniew Ziobro, argues the aid program will leave the country of 38 million people -- the EU’s sixth poorest -- on the hook for the debts of other members.

Ziobro argued it will also expose Poland to “blackmail” over after EU members approved rules to cut off aid to countries deemed in violation of the bloc’s norms. He said on Tuesday that such differences sometimes happen within the coalition, even though they vote together 99% of the time.

“We can’t waste this opportunity,” Prime Minister Mateusz Morawiecki told parliament ahead of the vote. “This money will decide on the development of Poland in the next 10, or even 20 years. The funds will play huge role in Poland’s catching up with the most advanced countries.”

The package, which was passed by Polish lawmakers in a vote of 290 to 33 with 133 abstentions, still requires the approval of seven more of the bloc’s 27 members. Delay or rejection by just one would hold back the plan aimed at rebuilding economies after the virus and a botched vaccine drive plunged the continent into a record recession.

Poland has been the biggest net recipient of EU aid since it joined in 2004, yet it has emerged as one of the bloc’s biggest rebels in recent years, clashing with the European Commission over everything from the independence of courts and media to gay rights.

Morawiecki’s cabinet sent the EU a national plan on Monday outlining how Poland plans to spend the EU funds it is eligible for.

The prospect of a fresh financial impetus from the EU could hand his Law & Justice Party a war chest to rebuild public support that has fallen during the pandemic. How the money is actually spent will become a crucial focus of attention before 2023 parliamentary elections.

Not all opposition parties voted to ratify the package, and some accused the Left of preventing them from negotiating better terms with Law & Justice.

The Civic Platform, for example, had lobbied for more funds in Poland’s plan to be earmarked for local administrations and municipalities where opposition parties are stronger. The party, which abstained in the parliamentary vote, also called for opposition parties to have more oversight on spending to reduce potential graft.

“Despite what the Left says, there are no guarantees that local administrations and non-government organizations will have anything to say in distributing the funds,” Civic Platform leader Borys Budka said. The process “lacks transparency,” he said.