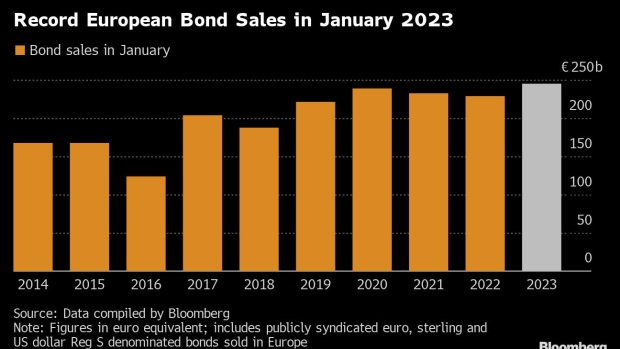 Offerings from the UK and European Union on Tuesday pushed marketwide sales to almost €245 billion, with the final month’s tally set to move even higher as Spain and Land NRW join the list of issuers planning new deals, according to data compiled by Bloomberg. It beats a previous record of just under €239 billion notched up in the same month three years ago.

“Issuers are just becoming more aware that when there’s a window they just need to make sure they get out rather than waiting,” said David Zahn, head of European fixed income at Franklin Templeton, which is overweight on European credit. “This year, the ECB is also going to be quite influential on how its policy rate goes, so issuers are thinking that it is only going to get more expensive to sell bonds, especially if you issue in the shorter end.”

Borrowers have been piling in to public debt markets during a start-of-year global credit rally that’s boosting corporate bond returns and driving down funding costs. Financial institutions in particular have been active, rushing to plug a funding gap as they prepare to shortly repay more of the pandemic-era cheap loans made available by the European Central Bank.

It’s already led to the busiest-week ever for debt deals in the region, with more than €100 billion raised in the five days through Jan. 13 as issuers like Deutsche Bank AG and Credit Agricole SA flocked to the market.

“The market has opened super supportive, with close to full market participation, and pricing with the expectation of a short and shallow recession rather than more severe scenarios,” said James Cunniffe, HSBC Holdings Plc’s head of corporate and structured debt capital markets syndicate for Europe. “This positive outlook combined with high levels of liquidity are certainly reasons to be looking at funding in this market very closely.”

It marks a stunning turnaround from a dismal 2022 for global credit markets, when central banks’ efforts to contain surging inflation buffeted issuance activity and on some days closed the door to any debt sales at all.

Borrowers will price €16 billion equivalent in Europe’s debt market on Tuesday, led by a £6 billion ($7.38 billion) UK gilt sale that amassed more than £68 billion of orders, according to a person with knowledge of the matter, who asked not to be identified as the information is private. A €5 billion offering from the European Union garnered nearly €52 billion of orders, a separate person with knowledge of that sale said.

--With assistance from Ronan Martin and Paul Cohen.