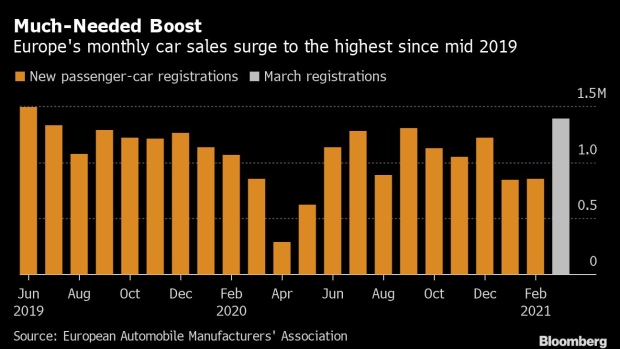 Europe’s auto sales soared last month from a depressed level a year ago, making up for a dismal start to the year even as virus-related restrictions persisted in key markets.

New car-registrations rose 63% in March, the European Automobile Manufacturers’ Association said Friday. The gains erased an early-year decline to leave sales up 0.9% for the quarter.

While automakers are benefiting from easy comparisons to a year ago, when countries were locking down to contain the spread of Covid-19, last month’s sales stack up well even relative to pre-pandemic. The 1.39 million vehicles registered was the highest since June 2019.

The figures are a welcome development for the industry after months of Europe’s car market lagging behind the recoveries seen in China and the U.S. Carmakers’ concerns have shifted dramatically from demand to supply issues, with the global chip shortage hampering production for the likes of Volkswagen AG, Stellantis NV and Renault SA.

March tends to be a seasonally strong time of year for Europe’s auto industry, so registrations were still about 13% below what the industry averaged for the month in the decade before the pandemic, according to the ACEA.

Carmakers have been coping with restrictions by moving sales processes online and taking advantage of government subsidies for electric vehicles. Economic forecasters have said the continent’s growth prospects rest on a vaccination program that started slowly but has begun to accelerate.

The industry witnessed historic consolidation during the quarter, with France’s PSA Group merging with Italian-American carmaker Fiat Chrysler to form Stellantis. About 47% of vehicles registered in the first three months of the year were VW or Stellantis models.