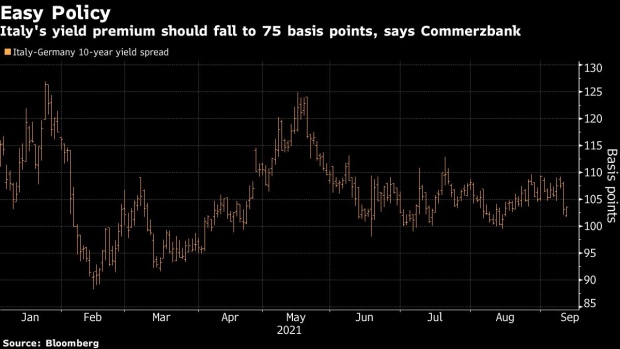 Christine Lagarde, president of the European Central Bank (ECB), speaks during a rate decision news conference in Frankfurt, Germany, on Thursday, Sept. 9, 2021. The European Central Bank will slow down the pace of its pandemic bond-buying program, an acknowledgment that the euro area’s recovery is strong enough to endure on less support. , Bloomberg

(Bloomberg) -- The message from the European Central Bank is that it’s in no rush to scale back stimulus, giving the region’s bond market a license to rally.

The yield premium on 10-year Italian bonds over German equivalents -- a key gauge of risk appetite -- narrowed by the most since May after President Christine Lagarde on Thursday said the ECB would delay a decision over when to end its pandemic bond-buying program, or PEPP, to December.

That’s encouraging traders to pile into carry trades -- a strategy that involves buying higher-yielding bonds to collect the coupon payments -- safe in the knowledge that the outlook is unlikely to change for the coming months.

“I found it remarkable that she explicitly said December and basically ruled out late October,” said Christoph Rieger, the head of fixed-rate strategy at Commzerbank AG, who expects the pandemic bond buying program to be extended next year. That should drive the 10-year Italian-German yield spread to 75 basis points, a level last seen more than a decade ago, he said.

Lagarde also signaled a moderate decrease in monthly purchases for now. Still, the ECB will continue to purchase more bonds than issued by euro-area governments through year-end, according to JPMorgan Chase & Co, keeping a lid on yields.

Italy’s 10-year yield premium over its German counterpart was steady at 103 basis points at 8:03 a.m. in London, after dropping more than four basis points on Thursday.

“The main winners are carry traders in our view, as they can look to a quieter autumn,” wrote Antoine Bouvet, senior rates strategist at ING Bank NV. “Only a further acceleration of inflation can upset this state of play in our view.”