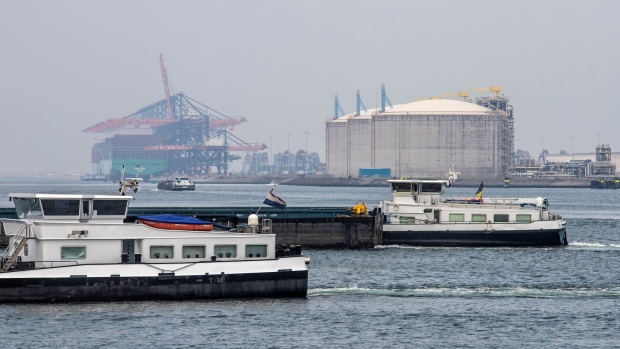 Inland vessels near the Gate terminal, an LNG import terminal operated by Nederlandse Gasunie N.V. and Royal Vopak N.V., at the Port of Rotterdam, in Rotterdam, Netherlands, on Tuesday, Aug. 16, 2022. Natural gas storage sites across Europe are 75% full, in line five-year average, providing some respite ahead of peak winter demand, as households and industries brace for further increases in their bills amid broader inflation. Photographer: Peter Boer/Bloomberg , Bloomberg

(Bloomberg) -- European natural gas prices fell after energy ministries agreed to postpone the formal approval of a package of emergency measures to tame a crisis ravaging the region’s economy.

Benchmark futures dropped as much as 5.7%. European Union ministers meeting on Thursday were trying to resolve sharp differences over a push to cap prices. A decision has been delayed until mid-December, with a group of countries pushing to toughen the price-cap plan, according to two EU diplomats.

Gas declined after four days of gains, with temperatures expected to fall below seasonal norms next week, according to forecaster Maxar. Unseasonably mild weather over the past two months and strong LNG flows that helped fill up storage sites had recently brought down prices from their summer peaks.

But the risks haven’t gone away. The peak winter demand season kicks in soon and any disruption to imports could tighten the market. With Russia squeezing energy shipments, Europe is also in direct competition with Asia for limited cargoes of liquefied natural gas, potentially driving up prices.

“Approximately half of all gas is consumed between December and February so Europe’s reliance on the LNG market is expected to remain strong,” ANZ Research said in a note.

The European Commission had come up with a proposal to cap the price of gas this week after repeated calls from a large group of member states -- even amid concerns from other quarters that the move could endanger supply. The proposed emergency brake level of €275 per megawatt-hour is well above current levels, raising the question if it will ever be used.

The language has been agreed for some other measures, which include provisions to limit intraday price volatility and strengthen a mechanism for joint gas purchases. EU energy ministers will hold another emergency meeting, likely on Dec. 13, the diplomats added.

German month-ahead power prices also dropped as much as 1.8%, while the country’s year-ahead contract was down as much as 2.2% on Thursday.