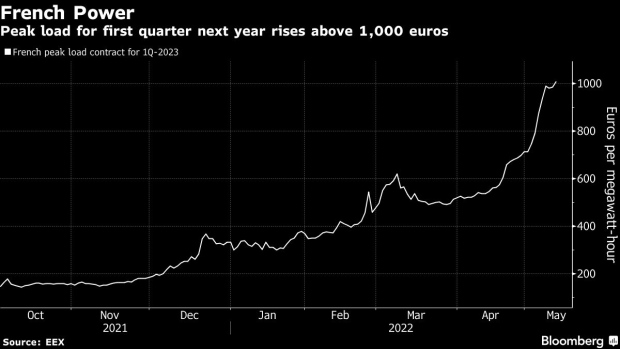 (Bloomberg) -- Extended outages and repairs at Electricite de France SA’s nuclear power plants are stoking fears that France won’t have enough electricity this winter and may need imports from its neighbors and it’s sending prices are soaring.

Output from France’s huge fleet of 56 nuclear reactors is forecast to be 25% lower than usual this winter, according to analysis by Baringa Partners LLP. France is usually Europe’s biggest exporter of power, sending vast amounts of electricity through interconnectors to the UK, Germany, Italy and Spain. This winter flows are set to be reversed as the deficit of cheap power in France pushes up prices far above its neighboring markets.

“It could become a fascinating winter across Europe,” said Phil Grant, Partner at energy consultant Baringa Partners. “Those plants are not coming back in time.”

French peakload prices, from 7 a.m. to 7 p.m., for first quarter next year jumped above 1,000 euros ($1,037) per megawatt-hour on the European Energy Exchange AG, almost three times as high as in Germany. The French baseload contract for same period is about double the price in Germany or Italy.

The extended outages couldn’t have come at a worse time for Europe as the continent tries to wean itself off Russian imports of coal and natural gas after the invasion of Ukraine. Instead of getting a helping hand from one of the biggest nuclear fleets in the world, generators in neighboring countries may need to burn more fossil fuels to supply exports of electricity to consumers in France.

The high prices across mainland Europe this year have already stirred up calls for export cuts in countries with lower costs like the Nordic region. So far, governments have not intervened in the market. For the UK, and many other nations used to replying on imports at peak times, the reverse of flows from France will increase the risk of political intervention, according to Grant.

“The possibility where governments might take more unilateral action to protect domestic security of supply has to be more credible,” he said. Given the unusual situation in Europe trying to phase out Russian energy, “the normal rules of the game does not apply.”