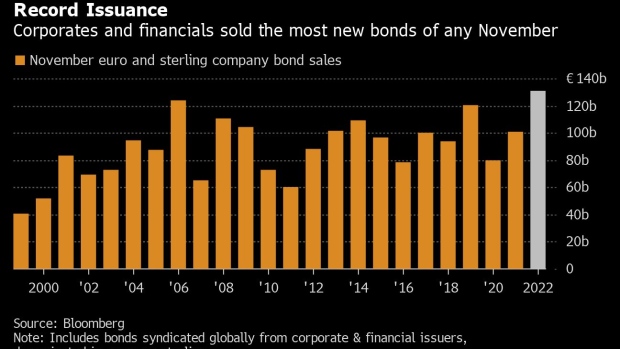 (Bloomberg) -- Europe’s main funding market saw its biggest November for issuance on record, as companies seized on easing costs and lower risk ahead of the holiday slowdown.

From Adidas AG and Nestle SA to Vonovia SE, corporates and banks sold the equivalent of over €130 billion ($135 billion) in new bonds in November. That’s the highest on record for the month, according to euro and sterling bond data compiled by Bloomberg going back to 1999. November’s tally was about 30% higher than sales in September -- usually the second half’s busiest month.

It was a blowout period in a year that’s otherwise set to be the lowest for sales since 2018 amid concerns about inflation, energy prices and the pace of central bank rate increases. Average borrowing costs eased by almost 20% for euro-denominated corporate bonds in the month according to a Bloomberg index, while risk levels plunged to levels not seen since early June.

The sales surge further illustrates how volatile the business of selling bonds has become, with issuers relying on positive headlines that grant a few days of stability to launch new deals. Firms are expected to continue to shore up funding this week, before issuance slows in order to complete exchange settlements ahead of the Christmas slowdown.

“This week is likely to be the last busy one,” said Giulio Baratta, BNP Paribas SA’s head of investment-grade finance debt capital markets EMEA. “This is indeed a good window to take advantage of, especially by the more known names.”

Financial firms made up around 70% of the month’s issuance, data compiled by Bloomberg show -- the only sector to issue more debt this year than last year as it adjusts to the end of the pandemic era’s cheap funds.

Sterling credit was also back on the radar for borrowers, bolstered by the UK government’s planned tax hikes and spending cuts. November saw £12.7 billion ($15.4 billion) of corporate and financial institution sales, the most in a month since September last year, according to data compiled by Bloomberg. This included the longest sterling corporate deal sold this year from Vodafone Group Plc.

“Bond issuers have come to terms with the recalibration in markets,” said Matthias Reschke, head of European investment grade finance at JPMorgan Chase & Co. “The second and third quarters were tough for issuance and companies are now coming to terms that waiting is not necessarily going to make it better.”

However, junk-rated debt was all but frozen out by sky-high borrowing costs. Only about 4% of November’s sales came from high-yield borrowers. With investment grade issuers offering coupons as high as 10.75% for riskier debt, investors have less need to take risks on lower-rated firms when seeking returns.

Bond bankers are bracing for a busy January pipeline as fresh money comes to the market, but worries linger. Recession fears, persistent inflation, downward revisions to corporate earnings outlooks and the pace of central bank interest rate increases are at the forefront of investors’ minds.

“I would expect January to offer a good window to complete new issuance, the first few sessions will certainly be busy as we enter the new year,” said Keval Shah, head of bond syndicate, credit sales & trading at Lloyds Bank Corporate Markets.

“However, whether the market remains buoyant throughout remains unclear,” he said. “The market will be watching earnings at the end of January for signs of how inflation and the economic slowdown are impacting corporate results, seeking an early clue as to how the credit environment will evolve in 2023.”

--With assistance from Colin Keatinge.