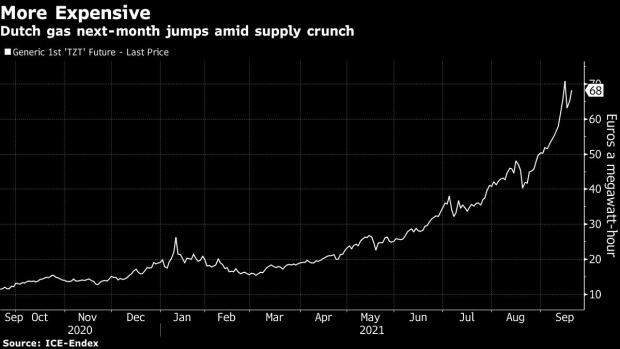 (Bloomberg) -- Europe’s natural gas prices rallied, with traders seeking signs that Russia will send more fuel to the region that would help alleviate the supply crunch.

The gas crisis is sending ripples through the region’s economy, with factories curbing output and U.K. energy suppliers going out of business. With the heating season just two weeks away, there are no real indications that the rally will slow anytime soon.

Auctions for extra gas transportation capacity from Russia into Germany’s Mallnow facility are currently underway, with the result available later on Monday. Whether Gazprom PJSC books any additional capacity “could give an idea about its strategy for the coming weeks,” analysts at Engie EnergyScan said in a note. A slump in flows into Mallnow on Monday is another sign that the Russian producer is favoring building up domestic stocks ahead of the winter.

The bullish factors are stacking up. Storage sites across Europe are also at their lowest seasonal level in more than a decade. Liquefied natural gas tankers are mostly heading to Asia, just as disruptions in U.S. supplies raise uncertainties. The Freeport LNG export facility continued to experience production issues after Storm Nicholas, with its train no. 3 tripped after the restart of the entire facility over the weekend.

“Moving to high price levels is a way of the market to take some of the demand out,” said Tom Marzec-Manser, an analyst for European gas and LNG at ICIS. “I have no doubt that gas will be delivered for those who need it the most, such as residential consumers. But other sources of gas demand might have to step away in the case the market gets really tight during the winter.”

His view resonates with a Goldman Sachs Group Inc. note from late last week, warning that industrial users will need to curb consumption. The surge in gas and electricity prices is also threatening to push more energy suppliers out of business in the U.K.

Low wind power output is prompting demand for natural gas to generate power, adding the bullish sentiment. U.K. gas power generation was at 60% of U.K. total, while wind output was at 9.3%, according to grid data.