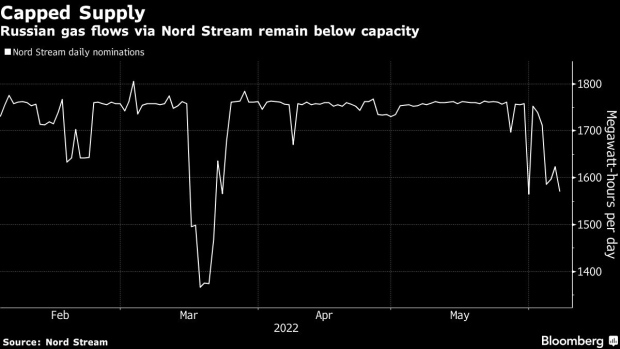 Orders show Russian shipments to Germany through the Nord Stream link may fall further on Tuesday after slipping over the weekend. Also, supplies from Germany to Poland dropped to zero at the start of the day, grid data showed. The Nord Stream operator said Monday that full capacity was available and actual flows depend on client requests.

The market has calmed significantly in recent days as consumption has eased with the onset of summer amid ample supply of liquefied natural gas. Disputes over Moscow’s demand to be ultimately paid in rubles for its gas seem to be over for now. While flows to some buyers that refused to comply with the system were halted, Gazprom PJSC is unlikely to impose further cuts for now, according to people familiar with the situation.

Supplies from Norway also declined amid works at the giant Troll field, and more capacity reductions are set for Wednesday with seasonal maintenance starting at a number of facilities.

Above-average temperatures are seen across most of Europe during the next two weeks, forecaster Maxar said in a report. While cooler weather is expected in Germany and France toward the end of this week, much higher-than-normal temperatures are forecast in the southwest at the start of next week.