The question has loomed over China Evergrande Group for months: Is the world’s most indebted developer too big to fail?

Investors finally have their answer. With a flurry of announcements that sent Evergrande bonds tumbling to record lows this week, the company and Beijing have made it clear that billionaire Hui Ka Han’s property giant is headed for one of China’s largest-ever debt restructurings.

Barring a last-minute shock, holders of US$19.2 billion in Evergrande dollar notes face deep haircuts as the company overhauls its mammoth balance sheet without a government bailout -- a process that promises to be long, contentious and potentially risky for Asia’s largest economy.

While ratings companies have yet to declare an official default, holders of two bonds issued by an Evergrande unit hadn’t received overdue coupon payments by the end of a 30-day grace period on Monday. S&P Global Ratings said on Tuesday that a default by the developer was “inevitable.” Evergrande didn’t immediately respond to a request for comment.

The developments mark the beginning of the end for the sprawling real estate empire started 25 years ago by Hui, setting off a lengthy battle over who gets paid from what remains. Evergrande said in a brief exchange filing on Friday that it plans to “actively engage” with offshore creditors on a restructuring plan. The company is planning to include all its offshore public bonds and private debt obligations in the restructuring, people familiar with the matter said Monday. 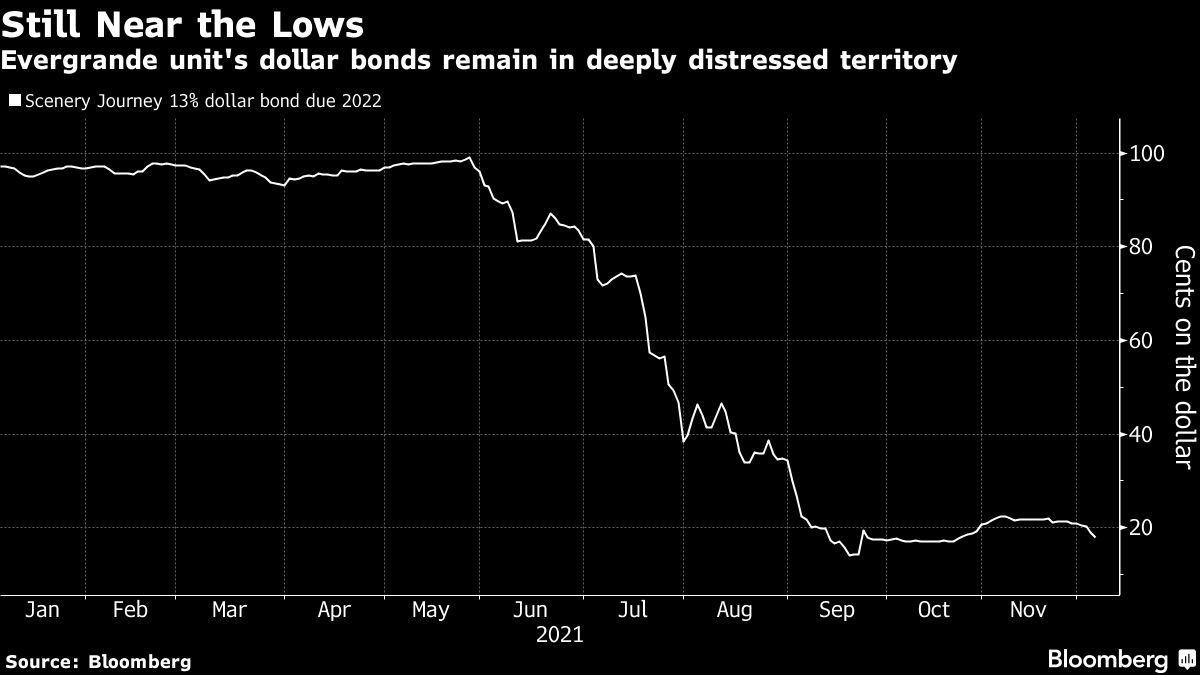 Evergrande, which disclosed more than US$300 billion of total liabilities as of June, becomes the biggest victim of President Xi Jinping’s efforts to crack down on the free-wheeling real estate sector and curb property speculation. Beijing’s reluctance to bail out the developer sends a clear signal that the Communist Party won’t tolerate massive debt build-ups that threaten financial stability.

The question now is whether the government can limit the fallout. Already, the stocks and bonds of smaller, lower-rated real estate firms have plunged. At least 10 have defaulted on onshore or offshore bonds since concerns about Evergrande’s financial health intensified in June. Kaisa Group Holdings Ltd., a major issuer of dollar bonds, has also been pushed to the brink in recent days. Junk dollar bond yields have soared above 20 per cent, making it prohibitively expensive for cash-strapped firms to borrow offshore. Home sales and prices have cratered, adding another headwind for an economy grappling with sluggish growth.

For now, Chinese authorities are signaling that they plan to ring-fence Evergrande and limit contagion rather than orchestrate a rescue as they’ve done during past crises.

The People’s Bank of China reiterated on Friday that risks posed to the economy by Evergrande’s debt crisis can be contained, citing the developer’s “own poor management” and “reckless expansion” for the problems it faces. The China Banking and Insurance Regulatory Commission said in a separate statement that loans for real estate development and acquisitions should be issued in a “reasonable” manner. 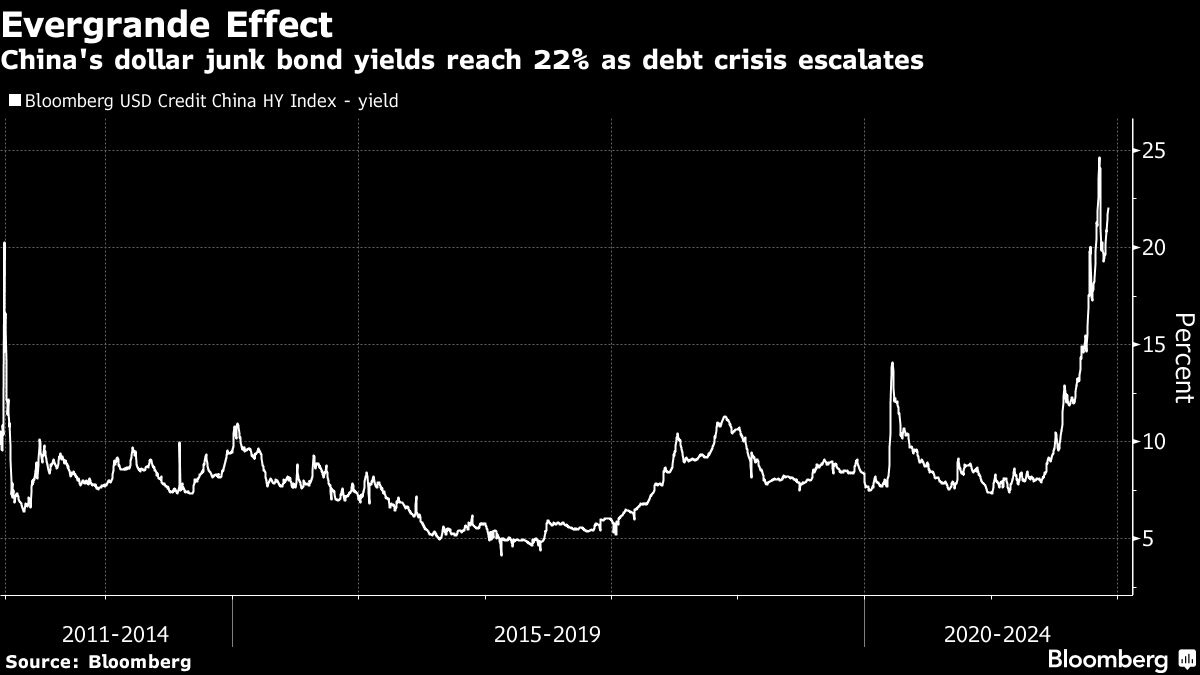 The latest financial system support measures came on Monday, with China’s central bank releasing about 1.2 trillion yuan (US$188 billion) of liquidity via a cut in the reserve requirement ratio for most banks. The government pledged to support the housing market to better meet “reasonable” needs, adding to signs it will ease real estate curbs.

Officials are also stepping in to help Evergrande run its business. Chairman Hui was summoned by the Guangdong government last week after the company said it plans to work with creditors on a restructuring plan. Authorities in Evergrande’s home province will send a working group to urge the builder to manage risks, as well as strengthen internal controls and ensure normal operations, according to a Dec. 3 statement.

So far, containment efforts haven’t assuaged investors. While pain has so far largely been contained to China’s smaller offshore credit market, that’s little consolation for developers that have relied heavily on international investors to raise funds. Borrowing costs have spiked for companies with the weakest balance sheets, including Kaisa and Fantasia Holdings Group Co.

In all, Chinese borrowers have defaulted on a record US$10.2 billion of offshore bonds this year, with real estate firms making up 36 per cent of that total, according to data compiled by Bloomberg.

“There is extreme stress in the market,” with about half the developers in the country in deep financial distress and pricing in high default risk, said Jenny Zeng, co-head of Asia Pacific fixed-income at Alliance Bernstein. 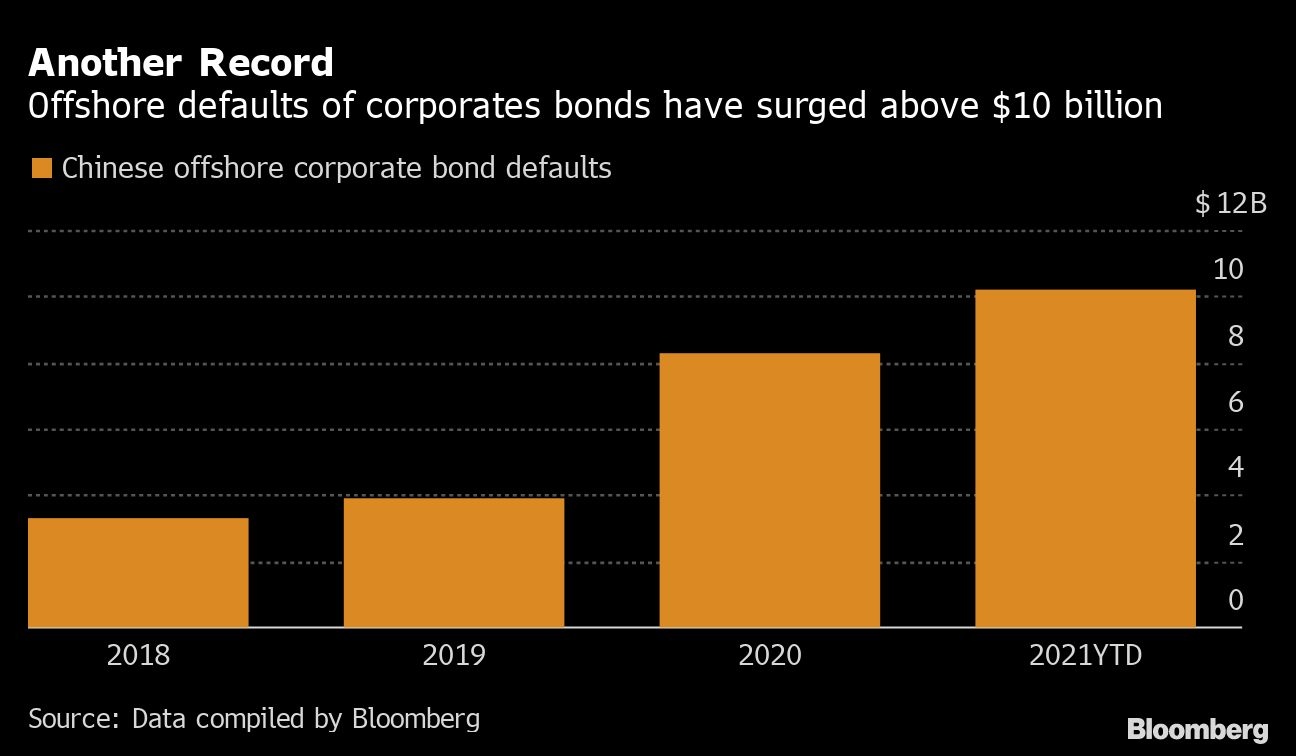 Still, China’s bigger, higher-rated developers such as Longfor Group Holdings Ltd. and Country Garden Holdings Co. are holding up much better than their lower-rated rivals. Country Garden, the largest developer by sales, has seen its 2031 bond rebound to 88 cents on the dollar, after dropping to 73 cents last month. A 2024 note sold by China Vanke Co., the second-biggest firm, has rallied to trade above par.

“We expect sector divergence to continue,” said Iris Chen, a credit desk analyst at Nomura Securities Co. “The high-quality survivors of the game will gain despite relatively high cash prices already, as they will have a better chance to restart normal refinancing, which will further strengthen their liquidity.” 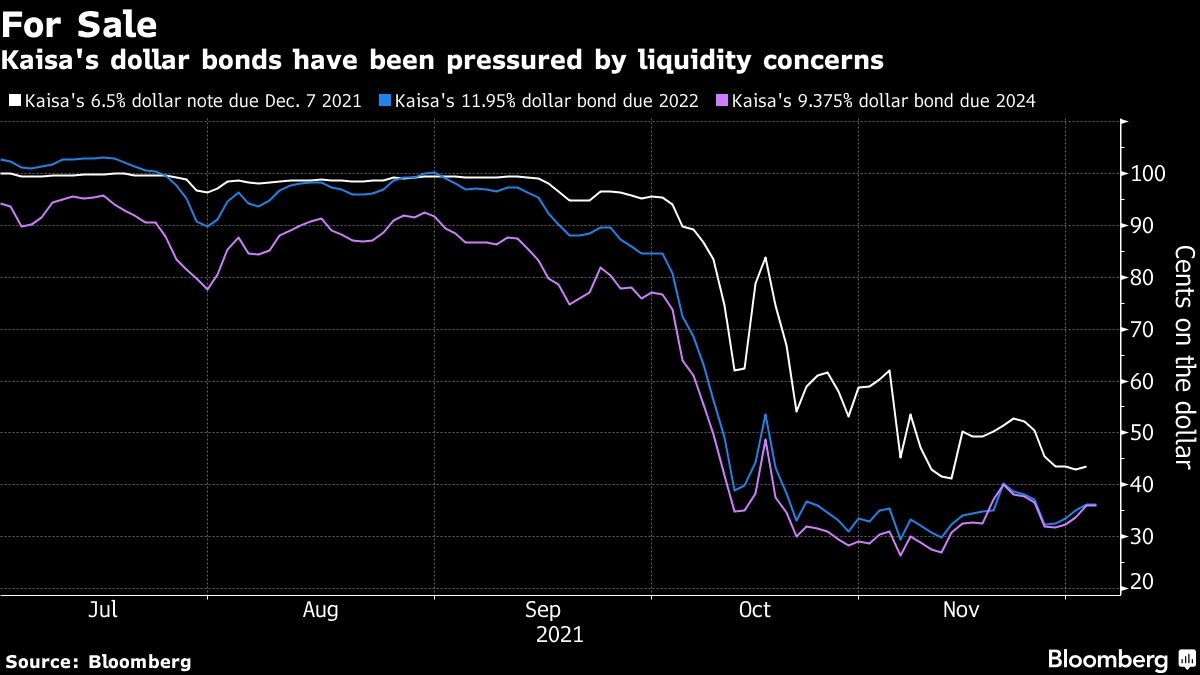 China is also trying to limit the fallout on the broader housing market, in a country where real estate accounts for about a quarter of economic output and as much as 75 per cent of household wealth. China’s housing slump has intensified in recent months after sales plunged and home prices fell for the first time in six years. Contract sales by the country’s top 100 developers plunged 38 per cent in November from a year earlier to 751 billion yuan, sharper than the 32 per cent drop in the previous month, according to preliminary data from China Real Estate Information Corp.

Any slowdown in real estate could have a ripple effect not only on China’s economy but on global growth. China’s growth slowed in the third quarter, with signs there will be more pain to come. The Federal Reserve last month warned that fragility in China’s commercial real-estate sector could spread to the U.S. if it deteriorates dramatically. China’s real estate sector makes up almost half of the world’s distressed dollar-denominated debt.

“Think about the cyclical risk out there if we lose China,” Ark Investment’s Wood said at a recent Milken Global Conference. “At the margin, China has been responsible for a tremendous amount of cyclical growth.” 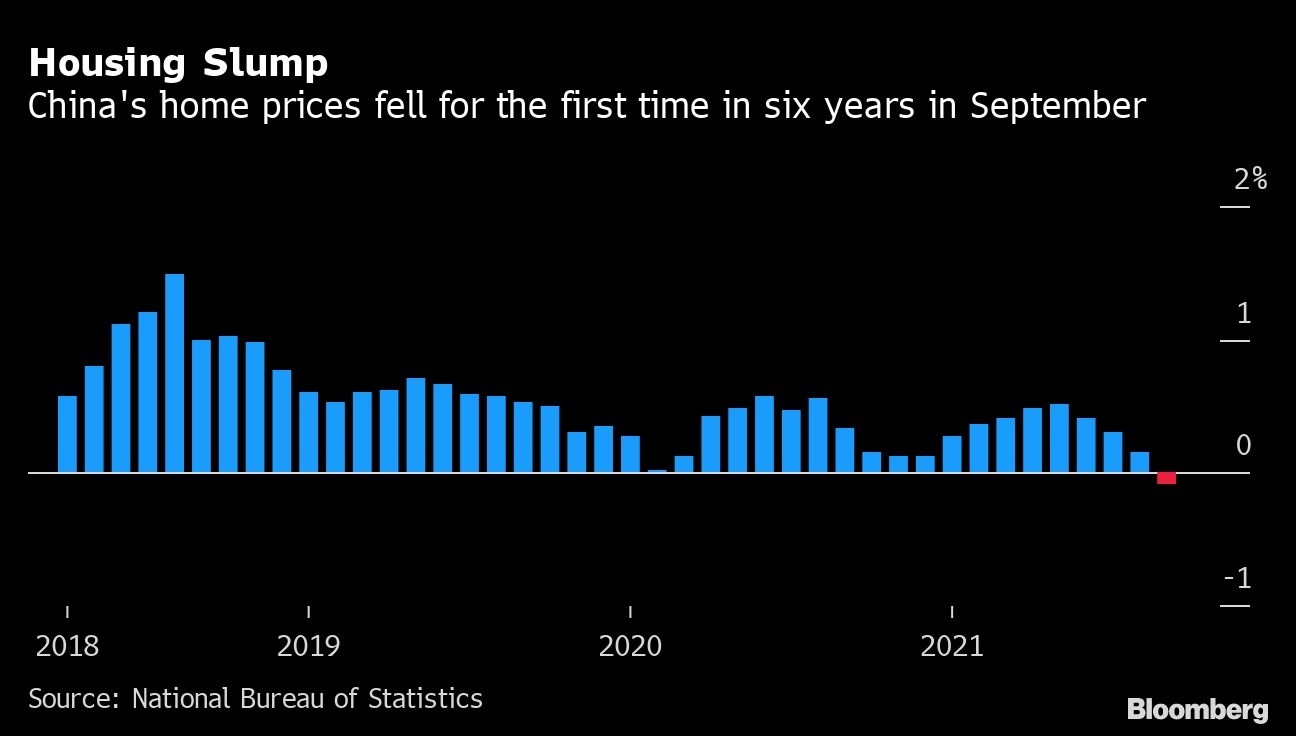 China’s government isn’t standing pat. President Xi oversaw a meeting of the Communist Party’s Politburo on Monday that concluded with a signal of an easing in curbs on real estate. The leadership panel, gathering in advance of a broader annual economic session that sets goals for the coming year, pledged to stabilize the economy in 2022.

For global bondholders, an Evergrande default is likely to start a prolonged battle for repayment. Chinese authorities have made it clear the company should put homebuyers, suppliers, and retail investors -- who bought the firm’s wealth management products -- ahead of debtholders. Some 1.6 million homebuyers have put down deposits with Evergrande for properties that have yet to be completed.

“No matter what the outcome, offshore bondholders are last in line for payment and are certainly going to have to accept haircuts, possibly significant ones,” said Andrew Collier, managing director of Orient Capital Research Inc. in Hong Kong.

With Evergrande’s dollar notes trading at about 20 cents on the dollar, the market is already pricing in a haircut of around 80 per cent. The key for bondholders is whether the company can speed up home sales and unload assets to raise cash so it can start settling its liabilities, said Gary Ng, a senior economist at Natixis SA.

Evergrande’s offshore noteholders included Ashmore Group Plc and UBS AG, according to data compiled by Bloomberg. Even as Evergrande’s stock and bond prices have plunged, Ashmore bought another US$100 million of bonds issued by the developer or its subsidiaries in the third quarter. The trades brought its holdings to more than US$500 million at the end of September, the data show.

Further market reaction to Evergrande’s missed payments may be driven by how the restructuring process plays out, said Jim Veneau, head of Asian fixed income at AXA SA.

“An orderly restructuring, where the company can run its operations as normally as possible and refrain from distressed asset sales will substantially help contain further damage across the sector,” Veneau said.

The single biggest loser in dollar terms may be Evergrande founder Hui, who once owned more than 70 per cent of the company before recent stock sales. The plunge in Evergrande’s share price this year has cut the chairman’s wealth by 73 per cent, or about US$17 billion, according to the Bloomberg Billionaires Index. Once the second-richest man in China, Hui now ranks 75th.

For years, the son of an impoverished wood cutter who built one of China’s biggest real estate firms and later branched out into electric vehicles, tourism and soccer clubs, has been able to count on the support of Beijing, or other tycoons to bail him out. This time, he appears on his own.