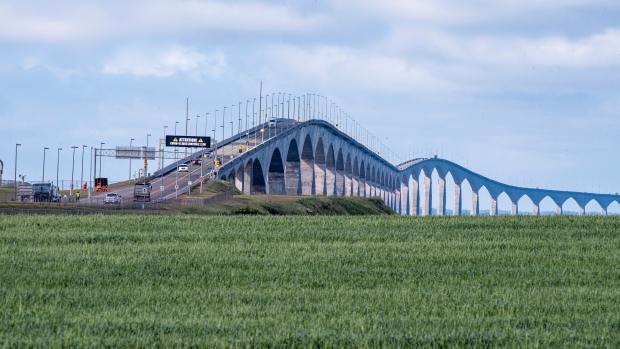 Motorists line up to cross the Confederation Bridge as the so-called tourism bubble for the Atlantic region begins, Friday July 3, 2020. , THE CANADIAN PRESS/Brian McInnis

Right next door, in Quebec, where three in five of Canada’s virus deaths have hit, rage over new lockdowns is palpable. In Ontario, ICUs are filling up. Out west, caseloads are hitting records, not to mention the exploding disaster across the U.S., which is shutting down yet again.

But in four eastern Canadian provinces, group limits have been raised and internal travel fostered. The region of 2.4 million has banded together, barred outsiders, hewed tightly to health guidelines and has a COVID-19 death rate a 10th of the country’s. With almost no one noticing -- and that’s how they like it -- Atlantic Canada, an outpost of quiet obedience and aging rural stoicism, has become a pandemic Shangri-La.

“It might be boring here but we’re healthy,” said Donnie Keenan, a retired business owner in Woodstock, New Brunswick, a farming community near the Maine border. “Boring is nice right now.”

The four provinces -- Newfoundland and Labrador, Nova Scotia, Prince Edward Island and New Brunswick -- have formed what they call the Atlantic bubble. And while there’s mild grumbling about struggling businesses, it’s a whisper compared with much of the continent.

Lisa Barrett, an infectious diseases specialist at Dalhousie University’s Faculty of Medicine in Halifax, explained it this way: “The people who live here have been incredibly compliant with the precautions. It’s far more a culture of ‘let’s get this done and stick with it’ as opposed to ‘I really don’t feel this is my job.’”

It’s especially noteworthy since the bucolic coastal region makes so much of its income off tourism, which it has largely shut down. A CBC satire show took note of this in a music video called “Frig Off!” with a cross-section of the region singing: “It’s not the time for hospitality, Frig Off! We’re more concerned with our mortality! Frig Off! We’re always on the lookout now for out-of-province plates, so don’t be driving here if you’re from Quebec or the States!”

The culture is distinct, steeped in the hardship of early European settlers and British loyalists who fled the U.S. And they care. New Brunswick Chief Medical Officer Jennifer Russell said people sent her photos of their Canadian Thanksgiving dinners to show they were eating outside. 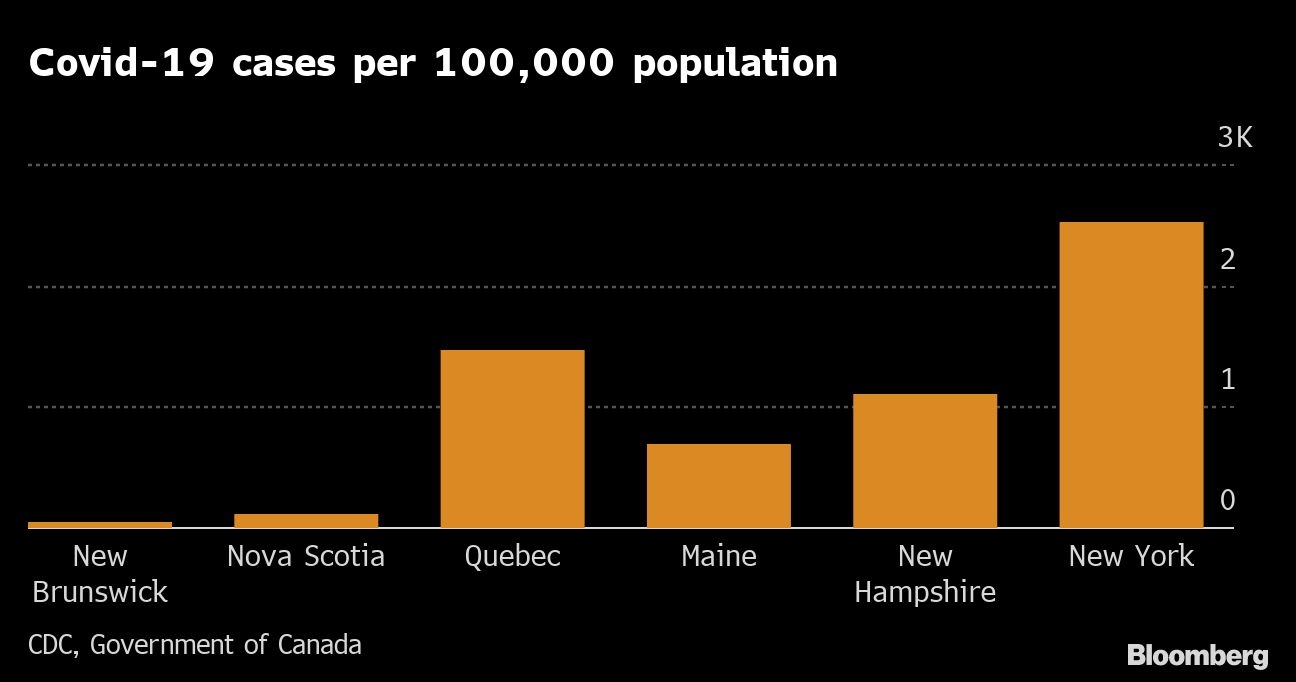 Part of their advantage is geographic. Atlantic Canada comprises islands, peninsulas, and uninhabited swaths where physical distancing is a way of life. The biggest city, Halifax, is Canada’s 13th most populated.

Risks of contagion, though, are real. New Brunswick, the entry point to two other provinces, sits next to Quebec, a hot zone where more than 6,600 people have died -- more deaths per capita than Texas.

So barriers went up. In May, a woman was denied entry into Newfoundland for her mother’s funeral. She and the Canadian Civil Liberties Association challenged the province’s travel ban in court and lost.

In New Brunswick last month, a Quebec couple hurrying to catch a ferry to Quebec’s Magdalen Islands hit a moose in the middle of the night. They couldn’t go to a hotel or even get into a police car, according to Joel Arseneau, a lawmaker representing the islands who called the official attitude “revolting.”

Traffic into New Brunswick, which runs checkpoints on four entries from Quebec and at airports, is down 80% from a year ago.

Newfoundland, where the median age is seven years above Ontario’s, has recorded only four deaths. That’s four more than Prince Edward Island. New Brunswick has had six. And most of Nova Scotia’s 65 fatalities came from one long-term care home.

For a young business like Charlottetown Yoga Space, in Prince Edward Island’s capital city, the results helped avoid a second lockdown that would be hard to survive, according to manager Erika Killam. Studio capacity was halved and clients wear masks till they sit so “It’s not like we’re going wild.”

The four provinces have created a sealed bubble so those inside it can travel.

External tourism collapsed. The number of visitors to Nova Scotia tumbled by 74% in August. This month, Calgary-based airline WestJet Airlines suspended more than 100 weekly flights to the region. On Prince Edward Island, for the first time since 1965, they canceled the Anne of Green Gables musical that celebrates the island’s claim to fame.

There’s no doubt that Prime Minister Justin Trudeau’s sprawling aid package, including a popular wage subsidy, has helped salve the economic pain. Still, the region stands in contrast with places like Quebec, home to vocal anti-masks protesters and exasperated restaurateurs who were forced to close a second time in most cities in October.

Residents are also being creative. A Halifax travel agency is organizing an all-inclusive trip to Cuba limited to Atlantic bubble residents. In Charlottetown, the Confederation Centre of the Arts is planning a show on the life of a Nova Scotia singer to cater to an Atlantic audience, Chief Executive Officer Steve Bellamy said.

Data suggest the region’s economy -- with the exception of Newfoundland, which is hurt by low oil prices -- fared better than some other parts of Canada. That may be because it was more sheltered. The three provinces don’t have a lot of large thriving businesses, resulting in higher public-sector employment. They have more pensioners. And private-sector wages are lower, said Richard Saillant, a public policy consultant.

One upside is the real-estate market, which has been booming. Dave Watt, who’s been a broker since 2007 in Fredericton, New Brunswick, says clients include locals who left and want to move back home.

As businesses get louder in asking for ways to open up the bubble safely, Russell, the New Brunswick chief medical officer, says she doesn’t take the collateral effects of the restrictions lightly. Numbers are edging up. The province already dealt -- successfully -- with several localized outbreaks in the past few weeks.

Still, it’s clear that there’s no better spot in North America to wait out the pandemic winter than the bubble. As yoga manager Killam, who’s American, says, “I feel especially fortunate to be here.”