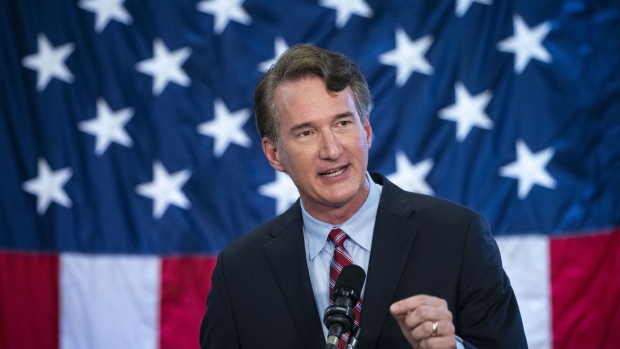 Glenn Youngkin, Republican gubernatorial candidate for Virginia, speaks during a campaign event in Fairfax, Virginia, U.S., on Monday, Aug. 30, 2021. Youngkin, the former Carlyle Group co-chief executive officer, is seeking to carefully tap into the energy that former President Trump brought to the Republican grassroots while keeping the party's most conservative element at arms' length so as not to turn off the state’s key suburban voters. , Bloomberg

(Bloomberg) -- Former Carlyle Group co-CEO Glenn Youngkin is ahead among likely voters in the Virginia gubernatorial race, according to a poll released Wednesday.

The result represents a turnaround from previous polls which showed former Governor Terry McAuliffe with a narrow lead in the race.

In a poll from the University of Mary Washington, 48% of likely voters said they supported Youngkin, the Republican nominee, while 43% backed McAuliffe. Another 2% backed a third-party candidate, Princess Blanding, and 5% said they did not know.

Early voting has been underway since last week in the race, which is being closely watched by Democrats for signs of how next year’s midterms may go.

Among all voters in the poll, McAuliffe was ahead, with 43% support to Youngkin’s 38%, meaning that Youngkin’s lead is likely due to higher Republican enthusiasm in the contest. Since the 1970s, the party opposing the incumbent president has prevailed in the Virginia governor’s race every time except for McAuliffe’s prior win in 2013.

The poll of 528 likely voters in Virginia was conducted Sept. 7-13. The margin of error is plus or minus 4.1 percentage points.