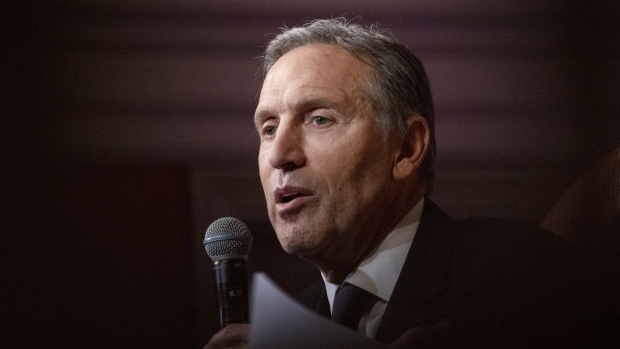 Howard Schultz, chairman emeritus and former chief executive officer of Starbucks Corp., speaks during his 'From the Ground Up' book tour in Washington, D.C., U.S., on Thursday, Feb. 14, 2019. Schultz, who is considering running for president in 2020 as an independent, last month said the debt overhang is an example of both major parties' "reckless failure" regarding their constitutional responsibility. , Bloomberg

(Bloomberg) -- Former Starbucks Corp. chief Howard Schultz is among the new investors in Israeli cybersecurity startup Wiz, according to people familiar with the matter.

The American billionaire invested in the last funding round, which valued the company at $1.7 billion a year after its founding, the people said, asking for anonymity because the information isn’t public. Representatives for Schultz and Wiz declined to comment.

Demand for cybersecurity for cloud-based services is booming as companies seek to bolster their digital defenses against increasingly sophisticated hacks, according to MarketsandMarkets. The global market is expected to double to $68.5 billion by 2025, the research firm wrote in July.

With the new funds, Wiz plans to expand outside the U.S., said Rappaport, who sold his previous cloud security startup to Microsoft in 2015, and ran the American tech giant’s research and development operations in Israel until 2019.