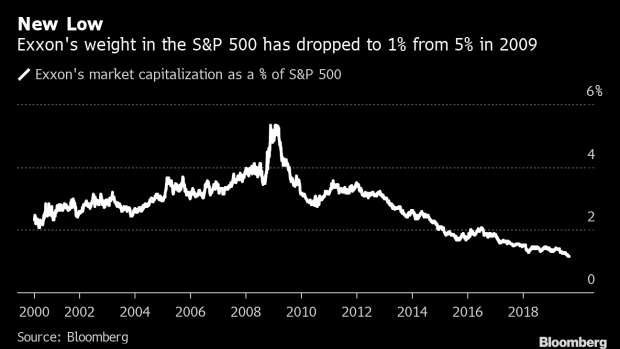 (Bloomberg) -- Exxon Mobil Corp. is poised to drop out of the S&P 500 Index’s 10 biggest companies for the first time since the index’s inception some 90 years ago, the consummation of a long-term trend of tech titans replacing industrial giants in the top ranks of U.S. stock market.

Visa Inc. replaced Exxon as the 10th biggest member of the index by weighting on Aug. 1 and two weeks later Procter & Gamble Co. also overtook the oil giant, according to data compiled by Bloomberg. S&P Dow Jones Indices will likely confirm the move when it publishes its month-end weightings Saturday.

“The oil sector has gone from being the leader of the world economy to a laggard,” said Tom Sanzillo, director of the Institute for Energy Economics and Financial Analysis, who traces Exxon’s presence in the S&P top 10 back to the 1920s.

The growth of technology giants like Facebook Inc., Amazon.com Inc. and Microsoft Corp. over the past decade coincided with the shale revolution that created an abundance of oil globally, weighing on energy companies. Exxon, once the gold standard in Big Oil, also has made some missteps: betting on Russia just before the country was slapped with sanctions and plowing money into U.S. natural gas in 2010 as prices collapsed.

With many investors betting on a post-hydrocarbon world, energy faces a battle to stay relevant to generalist investors. The sector makes up just 4.4% of the S&P 500 Index compared with 11.7% a decade ago.

To contact the reporters on this story: Kevin Crowley in Houston at kcrowley1@bloomberg.net;Brandon Kochkodin in New York at bkochkodin@bloomberg.net

To contact the editors responsible for this story: Simon Casey at scasey4@bloomberg.net, Catherine Traywick