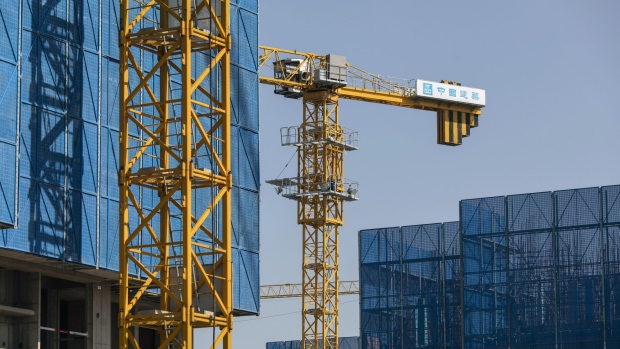 Cranes at the Sunac Resort project under construction, developed by Sunac China Holdings Ltd., in Haiyan, Zhejiang Province, China, on Friday, Feb. 25, 2022. A widely-anticipated push by China's government to boost construction in order to stabilize growth in the world's second-largest economy has yet to materialize, a blow to hopes that Chinese stimulus would lift global growth early on this year. Photographer: Qilai Shen/Bloomberg , Bloomberg

Chinese junk dollar bonds fell for a seventh day Thursday, according to a Bloomberg index, the longest losing streak in two months. Refinancing concerns are flaring as defaults mount and inflation drives rates up globally.

Bloomberg News will no longer publish the daily Evergrande Update after May 13. For coverage of China’s property industry, use TNI CHINA REL BBG on the Bloomberg terminal. Readers can also find news and analysis on the nation’s credit markets at NI CHCREDIT. See NI CHCREDTRK for our monthly China credit tracker.

While policy relaxation on onshore bond issuance might lower refinancing risk, it could take time for the market to regain confidence, Bloomberg Intelligence wrote in a report.

Moody’s cut the corporate family rating of Greenland Holding Group Company to B2 from Ba3, as it expects that the developer’s “refinancing risk will increase over the next 6-12 months, driven by its declining contracted sales and operating cash flow, as well as sizable bond maturities.”

Sun Hongbin, dubbed the “white knight” in China for bailing out fellow billionaires and their empires, was unable to rescue his own from the property crisis that’s engulfing the world’s second-biggest economy.

Though he dipped into his own pocket to the tune of $450 million, tapped investors to buy shares and raised more than $2 billion in all, it wasn’t enough for Sun to avoid default at his Sunac China Holdings Ltd.

S&P Global Ratings has downgraded Jinke Properties Group Co. to B+ from BB- as the developer has less headroom to absorb adverse liquidity conditions, the rating firm said in a statement. The borrower used cash on hand to repay debt while sales declined in the past few months, it added.