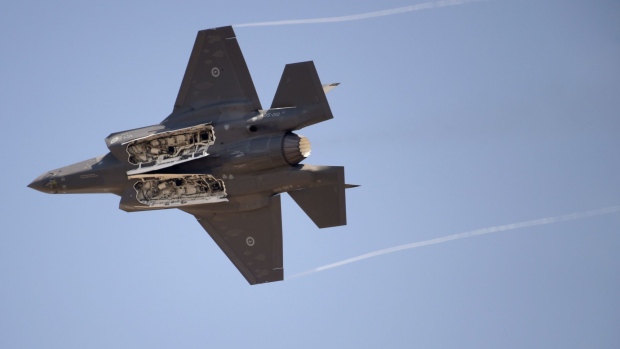 (Bloomberg) -- A $14 billion Pentagon software upgrade for F-35 jets is being installed on planes that are already deployed even though it’s “immature, deficient and insufficiently tested,” according to a new assessment by the military’s testing office.

Aircraft operators “identified deficiencies in weapons, fusion, communications and navigation, cybersecurity and targeting processes that required software modification and additional time and resources, which caused delays,” according to the 13-page assessment in the testing office’s annual report, which will soon be released.

Built by Lockheed Martin Corp., the F-35 is a flying computer, with more than 8 million lines of computer code, and software needed to increase its capabilities has been marred by problems since deliveries of the upgrades began in 2020.

The Defense Department’s F-35 program office has implemented “process improvements to address software development issues,” according to the assessment.

The F-35 section of the annual report, which has circulated inside the Pentagon for comment, is a combination of unclassified and “controlled, unclassified information.” Laura Seal, spokeswoman for the Defense Department’s F-35 program office, said the office will issue comments once the report is officially released.

Although the program office designed the upgrade effort around commercial “agile software” concepts, “it does not adhere to the published best practices,” and it has “consistently failed to deliver the capabilities contained in their master schedule,” according to the assessment under new Defense Department testing director Nickolas Guertin.

“The program has not sufficiently funded” teams to “adequately test, analyze data or perform comprehensive” check-up analysis “to assure that unintentional deficiencies are not embedded in the software prior to delivery,” the testing office added in the assessment. As a result, the current process has resulted in frequent “discoveries of critical warfighting deficiencies after fielding to the combat units.”

Bethesda, Maryland-based Lockheed has delivered more than 750 of a potential 3,300 jets to the U.S. and partners. They are in operation in nine nations, including South Korea, the U.K. and Israel.

The Block 4 software upgrade has a new processor to increase the computing power and memory of the F-35. The upgrade also is intended to allow the fighters to carry new AIM-9X Block II air-to-air missiles, all-weather Small Diameter Bomb II munitions, radar-killing AARGM-ER missiles, several allied-produced bombs and the B-61 nuclear bomb.

It’s not worked out that way so far. “Although designed to introduce new capabilities or fix deficiencies, the process has often introduced stability problems and/or adversely affected” other functions, with operational testing, training and active-duty military units discovering deficiencies, according to the report.